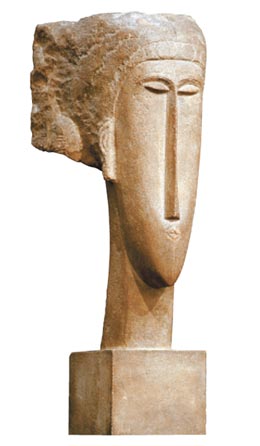 This sculpture by Amedeo Modigliani set a record for the highest price paid for a work by the artist. [AP/YONHAP]

PARIS - A stone sculpture of a woman’s head by Amedeo Modigliani fetched 43.18 million euros ($52.8 million) on Monday after a battle by bidders for the rare piece set a record for the artist.

The sculpture by the artist, born in Italy in 1884 but who died in Paris in 1920, dated from between 1910 and 1912 and had been estimated at between four and six million euros, excluding fees. The sale price includes fees.

“It’s a record for a work by the artist in any category,” including paintings and sculptures, said Christie’s, which organized the sale.

“Collectors from across the world were on hand,” either bidding by telephone or through representatives in the auction room, he said.

After offers hit 25 million euros, four bidders remained, with the tug-of-war between U.S. and European buyers who he refused to name.

“We knew the price would fly because there was huge interest in the last few days for this very beautiful piece,” he said.

“The art market is dynamic when quality works are up for sale. Collectors are after masterpieces and when one is under the hammer, everyone is on hand.”

The 65-centimeter (26-inch) head was part of an art collection owned by French businessman Gaston Levy, who founded the Monoprix chain of grocery and department stores and lived from 1893 to 1977.

It had remained in the family and had never been seen in public.

Shown for the first time at an exhibition in 1912, the sculpture has a special “presence, quality and elegance,” de Ricqles added.

The work is in the likeness of Modigliani’s most well-known portraits, with an oval face, almond-shaped eyes, a small mouth, a long fine nose and long neck.

Most of Modigliani’s 27 sculptures are currently in museums around the world, with 10 still in private hands.

The last record for a Modigliani was in November 2004, when a portrait of his wife and muse, Jeanne Hebuterne, went for $31.3 million at a New York auction held by Sotheby’s. The highest price previously paid for a sculpture by the artist was $3.5 million for a woman’s head in 2001.

Christie’s said the sale also set a record for an auction in France, after a Matisse oil sold for 35.9 million euros at the Yves Saint-Laurent “sale of the century” in February 2009.