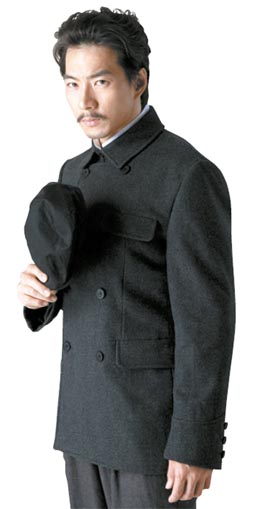 Television and film actor Song Il-gook makes his theatrical debut in dual roles as independence activist Ahn Jung-geun and his son Ahn Jun-saeng, who was said to be a traitor, in the new musical “I Am You,” which premieres in July. Provided by Gaeksuk

Actor Song Il-gook, who made a name for himself in television dramas and movies, is about to make his stage debut in a play that hits close to home. The play “I Am You,” commemorates the centennial of the patriot Ahn Jung-geun’s death. In it, Song is double cast as both the patriot and his son. It’s an impressive debut for an actor whose own family tree is peopled with historical figures.

Ahn Jung-geun (1879-1910) was a well-known independence activist who assassinated Ito Hirobumi, Japan’s first resident general of Korea from 1905-09. Ito was the chief instigator in Japan’s occupation of Korea in the early 1900s.

The play, directed by renowned stage actress Yoon Suk-hwa and slated to premiere at the end of July, depicts the lives of Ahn and his son Ahn Jun-saeng, who, in contrast to his father, was accused of being a traitor. Song plays both father and son.

Song gained recognition for his work in the TV dramas “Emperor of the Sea” (2005) and “Jumong” (2006), winning acting awards for his performance in both. His film credits include 2005’s “The Art of Seduction.”

He talked about his theater debut at a press conference last Wednesday at the Jungmiso Theater in Jongno District, central Seoul.

At the press conference, Song said that he was initially not going to accept the role because he didn’t feel ready for stage work, which he said he has always regarded as the most legitimate work for an actor.

But Yoon convinced him to put his fears aside and take the role.

Song also said he was inspired by what Ahn Jung-geun tells his son, who asks who and what his father is fighting for. “For you,” Ahn replies.

Song didn’t feel he could ignore the call to portray the independence fighter, perhaps because his family is closely tied to Korea’s independence movement.

Song is the great-grandson of Kim Jwa-jin, a well-known independence fighter in the early 1900s. His grandfather, Kim Doo-han, fought against the Japanese mafia, and many television dramas and movies have been made about his life. After Korea gained independence, Kim Doo-han became a member of National Assembly, participated in labor movements and was part of a movement against trusteeship.

“I’m proud because my grandfather was so honorable,” said Song.

Yoon said it was Song’s understanding of history that led her to cast him in the musical, particularly his participation in an annual tour to China that includes visits to places that were important to the independence movement. Yoon said she was also impressed that Song knew so much about Jun-saeng’s life and motivations.

“Jun-saeng is said to be part of a pro-Japanese group and is called a traitor and, but I don’t agree with that,” Song said. “If I or anyone else had lived during that period, we would have been like him.”