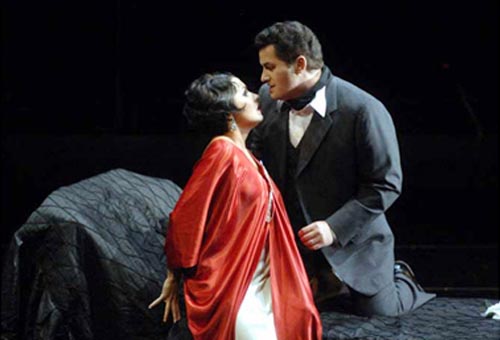 Army fuses American blues and rock music to create toe-tapping tunes sung in English. Their fiddle and harmonica-filled songs “Bang Bang” and “Train Leaving Lost It” will remind Western listeners of such 1960s greats as the Beatles and Johnny Cash.

Saturday: After rocking the Coachella Festival earlier this year, lo-fi duo King Khan & BBQ are making their way across Korea.

Pitchfork called King Khan “a stupendously stylish vocalist, able to ape everybody from the Big Bopper to Otis Redding without losing a move,” a reference to the band’s blend of 1960s doo-wop with garage punk.

The duo claim to have forged their unique sound while playing in an old Nazi bunker beneath an abandoned factory in Germany, where the Canadian duo then lived.

The band has released half a dozen records since their 2002 debut.

Saturday: Classical guitar duo Matteo Mela and Lorenzo Micheli have been hailed as having “profound and unforgettable musicianship of the highest order” by the Washington Post.

The Italian musicians are expected to play some well-loved guitar sonatas and chamber music.

June 23: This Vietnamese performer is known as one of the greatest living interpreters of Chopin. At this concert, his sixth performance in Korea, he will play Barcarolle Op. 60 and more.

The opera follows the romance between a kidnapped Ethiopian princess, Aida, and one of her Egyptian captors, Radames. When Egypt and Ethiopia go to war, the young couple must choose between their love and their country.

Aida will be performed alternately by Monia Massetti and Kim Hyang-ran.

To July 11: Korea’s only English-language children’s theater company presents a play about a dragon looking for a friend “just like me” who finds friendship outside his species. The show uses puppetry, animation, text and songs in English and interactive elements.

June 25-28: As part of the Korea Opera Festival, Kiwon Opera Company presents Verdi’s classic about a “fallen woman” and her tragic love affairs.

June 26-Aug. 22: The show that inspired a generation of young artists will be presented for the first time in Korea with a cast of top Korean performers. The original musical is one of the longest-running productions in Broadway history and has produced hits such as “One” and “What I Did for Love.”

The show features explanations of the Korean instruments being played in English, Japanese and Chinese.

Visitors will be able to participate in a Korean tea ceremony under the direction of the Myungwon Cultural Foundation and wear hanbok, traditional Korean clothing.

The performance starts at 4 p.m. Wednesday through Sunday. There are no performances on Mondays and Tuesdays.

Thursday: Six musicians in their 30s present the future of traditional Korean music in this special concert.

THE SOUND OF ASIA

Sunday: This free concert brings together the Korean ChungAng Traditional Orchestra and musicians from countries across Asia, including Mongolia, Tibet and Vietnam, for an evening of rarely heard classics and vibrant fusion styles that makes for a perfect introduction to Asian music.

The performance begins at 5 p.m.

YUN JINCHEOL’S SONG OF THE

June 26: Yun Jin-cheol is a singer of pansori, Korean lyrical storytelling, and the only one to preserve the full-length pansori “The Song of Red Cliff” in the old Boseong style, after reconstructing it from memory based on the performances of his mentor Jeong Gwon-jin.

Yun is a winner of the Jeonju Daesaseup Nori National Pansori Singing Contest. The full-length show will take place in an intimate setting: at the Dal small hall at the National Theater.

June 29: The Korea Foundation presents its annual concert for foreign residents with the theme “Challenge and Evolution.”

The concert, which features traditional Korean music in a modern style, will offer foreign residents a chance to better understand Korea through accessible performances.

Ahn Eun-kyung, a well-respected player of the piri, or traditional Korean flute, headlines the concert with original melodies that borrow from contemporary pop music and Western classics.

Through June 30: This art space celebrates its fourth anniversary with a retrospective of 11 films by Yoko Ono. The festival centers around the themes alternative film, fluxus and John Lennon and will feature “Fly,” “Imagine” and “John & Yoko Give Peace a Song,” among others.

Through Aug. 27: Musicians and singers offer different interpretations of the Korean folk song “Arirang” at this festival, hosted by the Changwoo Theater in Bukchon.

Today to Tomorrow: “Dano,” one of Korea’s four major traditional festivals, which falls on the fifth day of the fifth month according to the lunar calendar, has been honored in many parts of Korea for a long time.

Various performances of folk plays, traditional and modern music and dance will be held in the ancient city of Jeonju, famous for its rich cultural legacy.

Other programs will include a ssireum (traditional Korean wrestling) competition, making Dano fans, a fireworks display and lantern-lighting.

To get there from Seoul, take a bus or KTX train headed to Jeonju.

June 12 to Saturday: The “Gangneung Danoje,” a typical Dano festival in Korea with a history of more than 1,000 years, has been designated as one of the “Masterpieces of the Oral and Intangible Heritage of Humanity” by Unesco.

Programs will include rituals in honor of gods and performances of traditional music, dances and plays, as well as hands-on experience programs for foreigners.

Performers from China, Japan, Uzbekistan and Mongolia will also introduce their traditional culture and martial arts.

To get there from Seoul, take a bus or KTX train headed to Gangneung.

June 21 to July 4: This an annual classical music festival started in 2007. It includes an opening concert, DITTO Friends I and II, Family Classic, DITTO Symphony and Ensemble DITTO Recital.

One of the founding members of this event in 2007, Richard Yongjae O’Neill, will be performing at Ensemble DITTO.

The starting time of each concert varies.