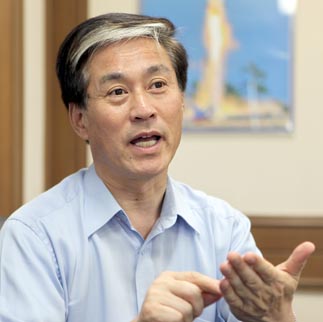 On Saturday afternoon, only a few hours before the World Cup match between Korea and Greece was set to begin, Lee Joo-jin, head of the Korea Aerospace Research Institute, and his senior researchers sat heatedly discussing the country’s second failure last week to successfully launch the Naro-1 rocket.

“I am so sorry to disappoint everyone once again,” said Lee, who admitted to suffering from stomach cramps and chronic fatigue since the failed launch. “We will try our best to successfully launch the Naro-1 next time.”

Lee certainly does not lack for qualifications, having graduated from Seoul National University and received a Ph.D. from Johns Hopkins University in mechanical engineering. Having also worked as a researcher at KARI since 1991 and participated in developing the country’s Arirang satellites, Lee is a living witness to the growth of aerospace technology in Korea.

Since becoming the head of KARI in December 2008, Lee has overseen the first and second launch attempts of the Naro-1, as well as the scheduled launches of the Communication, Ocean and Meteorological Satellite later this month and the Arirang-5 next year. For now however, Lee is concentrating on investigating the causes of the failure of the Naro-1’s second launch, while making preparations for a third attempt next year, when KARI and Russia will work together.

“The contract stipulates that Russia participate in the third launch of the Naro-1 should the first two attempts [to launch the Naro-1 into orbit] fail,” Lee said, adding that it will take more time to prepare for the third launch because there are many issues left to discuss with Russia in the production of the first-stage rocket.

In an exclusive interview, Lee shared his thoughts about recent accusations that he hid details of the explosion at the first press briefing, plans to determine the causes of the second failure and his insights into the third launch.

Q. Some people say that you knew about the explosion of the Naro-1, but didn’t disclose this fact at the first press briefing.

A. I guess from an outside perspective, it is possible to interpret my reaction as such. However, it was impossible to conclude whether the rocket exploded or not at that time. Such a conclusion can only be made after carefully analyzing the data sent from the Naro-1 before its explosion. The only thing we could say for sure was that communications with the Naro-1 were cut off.

Some aerospace experts have pointed out that it must have been possible to observe defects in the first stage rocket from the color of the flame coming out of it.

The color of the flame depends on many factors such as sunlight, the angle from which you look at the flame, optical illusions and so on. It is hard to say what the problem was before looking at the data from the Naro-1.

Is there a lot of finger-pointing among Korean and Russian researchers?

No. Korean and Russian researchers are cooperating very well to determine the causes of the explosion. Speculation about the relationship between Korea and Russia being damaged by the explosion of the Naro-1 only adds to the burden on our shoulders. We will convene a Failure Review Board on Monday.

How long will it take to determine the causes of the explosion?

It took us half a year to conclude that defects in the rocket’s protective shields, called fairings, were the cause of last year’s failure. It will take some time to determine the causes for this failure as well. In fact, the explosion happened at an altitude of 70 kilometers [44 miles] and no one saw what went wrong.

Are you planning to recover the pieces of the Naro-1 that fell into the sea south of Jeju?

It is hard to say because if it is possible to determine the causes of the explosion from the data sent from the Naro-1 before it exploded, it may not be necessary to examine those pieces. It would cost a huge amount of money to recover them from the sea from a depth of more than 200 meters [656 feet]. We saw how difficult it was to recover the Cheonan only a few months ago, and the sea there was only 20 to 40 meters deep.

It has already cost 800 billion won ($655 million) to build the Naro-1 and its launchpad. What do you think was gained from the second failure?

It’s hard to say in numbers. I am deeply sorry for the two failures but we learned how to build and operate launch pads, and build a second stage rocket on our own. The U.S. and Russia spent several trillion won to reach the level that we are at now. I deeply regret the second failure of the Naro-1, but I think we have gained a lot of experience and knowledge in aerospace technology through the failures.

Why do we need to independently develop launch vehicles that require a huge sum of taxpayer money?

I understand that many countries, apart from the nine countries that have the technology to launch rockets on their own, commission other countries to launch satellites for them, but almost all developed countries are investing in aerospace technology because the aerospace industry has huge potential. It is an important step in order to improve Korea’s national image as well. Since Korea is the only divided country in the world, investing in the aerospace industry also brings benefits to national security. If we don’t have our own launch vehicles, we can’t put up satellites whenever we want.

KARI plans to successfully launch the Naro-1 and develop Korea’s own launch vehicle, but is this really plausible?

Korea has a well-established infrastructure to develop advanced technology as well as high-quality human capital. Koreans work hard and have the perseverance to create something from nothing. We will try our very best not to disappoint all those who have supported us.