Administration under fire at June 15 event

Administration under fire at June 15 event 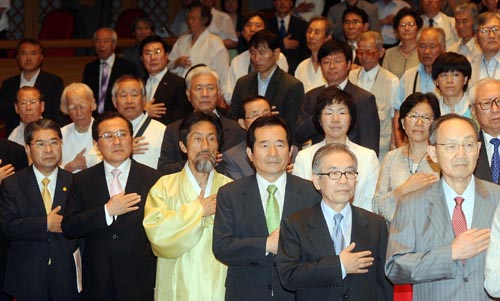 Liberal political leaders yesterday attend a ceremony to commemorate the 10th anniversary of the June 15 Joint Declaration between the two Koreas in 2000 at the Jogye Temple in Seoul. [NEWSIS]


Aides of late President Kim Dae-jung put the blame for heightened tension on Korean Peninsula entirely on Seoul yesterday as they marked the anniversary of a peace accord made at the first inter-Korean summit a decade ago.

A nonprofit organization formed by Kim’s aides, most of them opposition party lawmakers and progressive scholars, calling itself the Commission to Follow Through the June 15 Declaration on the Southern Part, held an event in Seoul yesterday to commemorate the 10th anniversary of the June 15 Joint Declaration.

While mentioning nothing that implied that North Korea played a role in the sinking of South Korean warship Cheonan on March 26, a tragedy that claimed the lives of 46 South Korean sailors, the aides blamed the South Korean government for creating inter-Korean tensions.

One questioned the results of a multinational investigation that determined the ship was sunk by a North Korean torpedo attack.

“I cannot but raise an objection over the government’s stance that it will overthrow every agreement made between South and North Korea and risk a hostile act toward the North based on such an unreliable report,” said Paik Nak-chung, a professor emeritus at Seoul National University who heads the commission.

Paik said it was inevitable that a recent review by the Board of Audit and Inspection on the military’s response to the crisis would spawn new suspicions. Last Thursday, the BAI blamed the South Korean military for dereliction of duty and fabrication of documents to cover up the flaws in its response to the Cheonan sinking.

“[The BAI] has to audit how the investigation that contradicts hard evidence and circumstantial evidence could come out, and if it is a fabrication, who would dare to do such things,” Paik said.