SICA plans to condemn the North

SICA plans to condemn the North 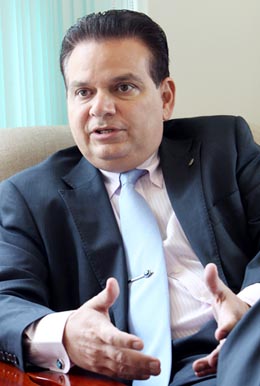 Members of the Central American Integration System (SICA) will issue a statement condemning North Korea’s attack on the South Korean Navy warship Cheonan when they meet in Panama this month, according to that nation’s ambassador to Seoul.

In an interview with the JoongAng Daily last Friday, Jaime Leonel Lasso del Castillo said that the tensions on the Korean Peninsula will be on the agenda for the June 29 summit, and that most of the countries belonging to SICA support the results of South Korea’s investigation into the disaster. South Korea presented those findings to the UN Security Council this week in an effort to reprimand the North.

“Panama expressed its opinion after the results of investigation by South Korean government were released [on May 20] that Panama definitely backs up South Korean’s investigation and also expresses its sympathy to the families” of the 46 sailors killed in the attack, Ambassador Lasso said.

“We don’t understand how North Korea can still do things to provoke South Korea. This is not the first time. There was the assassination of the first lady [Yuk Young-soo, who was killed during an attack on her husband, Park Chung Hee on Aug. 15, 1974], and Navy officers were killed several years ago. .?.?.

“The world’s better off without atrocities.”

The South will be able to present its evidence against Pyongyang to SICA members firsthand at the summit, Lasso said.

South Korean President Lee Myung-bak is scheduled to attend the summit, and will also meet with Panamanian President Ricardo Martinelli on June 28, according to Blue House.

Lasso, a physician-turned diplomat who has been in Seoul for 10 months, said the SICA conference will touch on issues ranging from politics to commerce and investment to economic cooperation. He said that SICA members hope to open talks about a free trade agreement with South Korea.

“SICA will ask Korea to open its market to more imports. South Korea is good at exporting but is not good at importing, everybody knows that.

“Korea puts more regulations on imports, and that’s something that needs to be changed a little bit,” Lasso said.

He said the June 28 bilateral summit will focus on copper mines fields and investments.

Lasso added that South Korea is the fifth-heaviest user of the Panama canal, which connects the Atlantic and Pacific, and he hopes the two countries will increase exchanges in areas other than business, such as education and culture.

“Asian countries have a lot to offer, and Korea is one of the top in terms of society, people and education. We brought people from [Korean broadcaster] EBS to Panama for five to six days to make a program about Panama and they broadcast here,” Lasso said. “We’re trying to make Korean people more aware of Panama.”