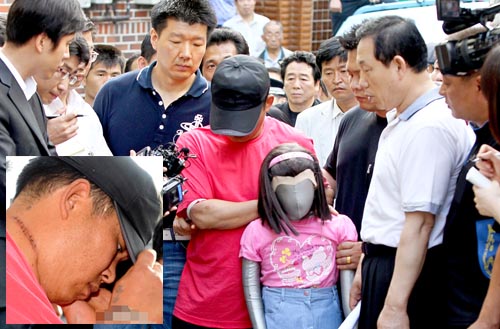 Kim Su-cheol, inset, uses a mannequin to reenact the kidnap and rape of an 8-year-old girl yesterday at the crime scene in Yeongdeungpo District, Seoul. By Cho Yong-chul


The man who police say snatched an 8-year-old girl from an elementary-school playground and brutally raped her told investigators yesterday that once he got her in his room he held the blade of a box cutter to the girl’s neck to keep her from screaming.

“I told her to be quiet but she didn’t listen to me so I held the blade to her throat. Then she instantly became quiet .?.?. I’m sorry,” Kim Su-cheol told investigators as he hung his head during a re-enactment at the crime scene with investigators.

“There’s a devil of lust inside of me. I deserve death for my crime,” said Kim, who was jailed for rape in 1987.

The two-hour re-enactment, staged to see how Kim’s story matched with what the girl told police on Monday, began at 6 a.m. yesterday at the school where the victim was abducted on June 7. Once it reached an alley that leads to Kim’s house, about 480 meters (1,575 feet) away from the school, police opened the scene to the public.

For a few seconds, Kim met the stares of about 100 waiting journalists as he emerged from a police car wearing a red T-shirt, black baseball cap and black pants. Then he quickly jammed his hat down on his head.

Stitches ran 10 centimeters (3.9 inches) down both sides of Kim’s neck. Police said he slashed himself with the box cutter when he was arrested nine hours after the crime.

Kim, a 45-year-old temporary construction worker, held the neck of a mannequin dressed in a pink T-shirt and blue skirt as he passed through alleys barely big enough for a man to navigate.

Angry passersby yelled curses at him, while others demanded that police remove his cap so they could see his face.

“I have a granddaughter around her age and I just can’t believe such a horrible thing happened in my neighborhood,” said Noh Gwang-seon, 68.

“A person who has committed such a crime even once should get the death penalty, or be jailed for his entire life,” said Yang Byeong-gyun, 72.

When investigators asked Kim whether he remembered what he did to the child in his room, Kim said his memories weren’t clear.

“It sounds like I’m making an excuse, but I was drunk,” Kim said. “I had two bottles of soju, three cans of beer, and one bottle of beer that day.”

Kim told investigators that after he raped the girl, he thought about killing himself with sleeping pills.

The child was hurt so badly in the assault that she required six hours of surgery. She is still in the hospital.

Police said they will file additional charges against Kim for violating the law governing child and youth sex before they hand the case to prosecutors this morning. The legal age of consent in Korea is 19, and the law provides harsher punishment for those who have sex with children under 13.

Police said Kim paid an 18-year-old runaway to have sex with him about 30 times. The girl, a middle-school dropout who lived with Kim for two months this year, was paid 20,000 won ($16) each time, but was not forced into intercourse, investigators said. Kim reportedly admitted to police that she is pregnant, but said she doesn’t know who the father is.

Investigators said Kim also kept a notebook with a list of teenagers’ names and phone numbers, but said they have confirmed that none of them were sexually assaulted.