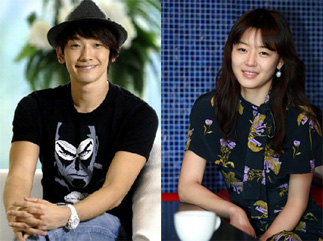 Actor-singer Rain and actress Jeon Ji-hyun have denied reports they are dating and their management companies are threatening to take legal action against the tabloid that published the report earlier this month.

Speculation about the couple began when the tabloid Sports Seoul reported on June 10 that the two had been dating since October 2009. According to the report, which was accompanied by photos of the couple, the two stars met frequently at Jeon’s apartment.

The stars’ respective management companies have refuted the report and both have talked about taking legal action against the tabloid for infringement of privacy.

On the day the report was published, Jeon’s management company, Sidus HQ, said that the couple is not dating. The company also said that reports that the two have matching accessories - a ring and a bracelet - is only true in so far as the accessories are of the same brand.

Also that day, Rain’s management company, JTune Entertainment, issued a press release saying that Rain’s ring was from his family and that he was near Jeon’s apartment building because he was visiting a friend of his who lives there.