How the polls got the local elections all wrong

How the polls got the local elections all wrong 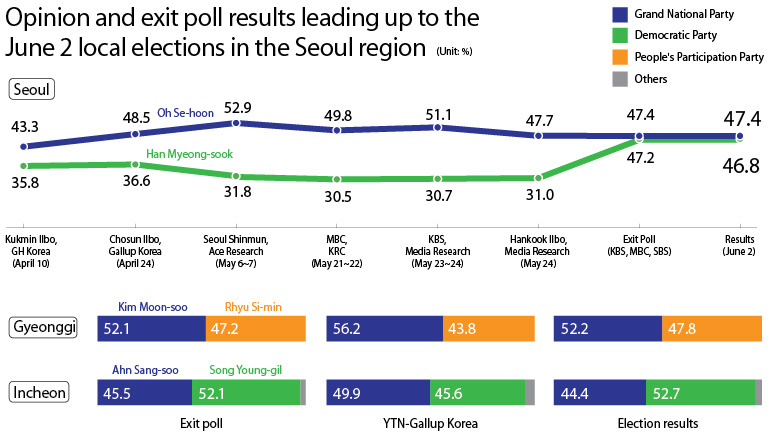 By midafternoon on June 2, the Seoul mayoral election had started to resemble an intense sports match, as minute-by-minute exit poll results zeroed in on a less-than-1 percentage point difference between incumbent Oh Se-hoon and challenger Han Myeong-sook of the Democratic Party.

In a nail-biter, the ruling Grand National Party’s Oh was re-elected for a second term as Seoul mayor that day with 47.4 percent of the votes, beating Han with 46.8 percent.

Despite the dramatic triumph, which occurred amid spreading public distrust of the current administration’s handling of North Korea and the Cheonan incident, the reaction of the GNP and Oh to the win was far from joyous.

At the beginning of his inauguration speech on June 3, Oh said, “Although I’ve won in this election, I couldn’t help but reflect deeply on myself [after the results]. I will accept today’s victory with a humble heart as if I had in reality been defeated.”

Oh’s speech consistently alluded to his disappointment with the GNP’s nationwide results as well as the minuscule margin between him and Han. Looking back at opinion poll results from a month earlier, Oh’s reaction is more than understandable.

Key opinion polls conducted by the country’s leading media groups and research companies put Oh’s winning margin at up to 20 percentage points. One survey conducted by the major daily Dong-A Ilbo and the Korea Research Center from May 24 to 26 forecast that Oh would beat Han by 20.8 percent. In a separate opinion poll conducted by another major daily, the Chosun Ilbo, and leading researcher Gallup Korea on April 24, Oh was in the lead with a more than 11 percentage point difference. 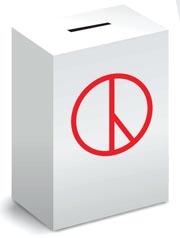 From his demeanor, it’s clear Oh knows he was one of the lucky ones. In many other regions, GNP candidates were forecast to take sweeping wins in pre-election opinion polls, especially in the Seoul metropolitan area, including Incheon and Gyeonggi. The election results, however, gave close - or in some cases more comfortable - victories to the DP. The Democrats won the top administrator spot in seven regions in these elections, while the Grand Nationals won in six.

Meanwhile, the exit poll, conducted jointly for the first time by Korea’s three main broadcasters KBS, SBS and MBC was spot-on, predicting 47.4 percent for Oh - exactly the amount he later was confirmed to have won.

The exit poll also predicted that the newly elected Gyeonggi governor, the GNP’s Kim Moon-soo, and Incheon Mayor Song Young-gil of the DP would both win by 52.1. The actual election results were almost exact matches, with Kim pulling 52.2 percent of the vote and Song winning 52.7 percent. 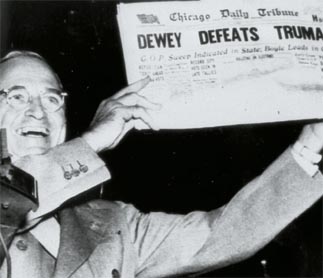 President Harry S. Truman holds up a copy of the Chicago Tribune with a famously erroneous headline the day after winning re-election in 1948 in this famous United Press photo.

Why the sharp divide between the pre-election polls and the exit poll? Experts point first to a difference in the samples. “Exit polls are conducted on voters - those who actually get out of their homes, vote and have exited the polling stations. Opinion polls, however, are a random survey of people through the telephone, of those who are eligible to vote,” said Rhee Chul-hee, vice president of the Korea Society Opinion Institute.

In terms of their methodology, many experts say local opinion polls are outdated and insufficient to provide an accurate representation of public opinion. As it is illegal for telecom companies to reveal their customers’ personal information to others, including cell phone numbers, opinion polls at the moment are conducted only through home landline phones with numbers that are listed in the phone book.

Since this election hinged on the high turnout among young voters, who came out in droves due to their growing frustration with the GNP, home-phone polls underrepresented the young and the employed. “With many of these opinion poll surveys being conducted over landline phones during the afternoon, those who answered were mostly housewives, senior citizens or unemployed people. These people tend to be more conservative-leaning, hence the optimistic GNP count in pre-election opinion polls,” said Bak Hee-je, a sociology professor at Kyung Hee University.

Pollsters argue that it is unfair to expect opinion surveys to reflect election results as closely as exit polls. “Exit polls are conducted on the day of the election on every fifth voter who walks out of the voting booth. Of course they will be more accurate than opinion polls,” said a head researcher at a leading local research company who wished to remain anonymous. Under election law, pollsters are banned from publicizing the results of public opinion surveys starting from a week before the election so as to avoid influencing voters.

But surely when the pre-election polls are so completely inaccurate in almost every way, there must be a way to solve some of the systemic problems.

“First of all, it is no longer acceptable to rely solely on home landline phones for opinion polls. Also, in Korea, there is not enough time and money given for us [research companies] to conduct pre-election opinion polls,” said an analyst at a leading local research company who participated in an opinion poll for the local elections this year. He said that his company only had two days to finish the poll and that if the person on the other end didn’t pick up, there was no repeat try and operators just went on to the next eligible voter.

Rhee said, “There are methodological problems for sure in Korea, but a bigger problem is that the clients who ask for these opinion polls, like newspapers and politicians, request them mostly for approval ratings only, instead of more in-depth, issue-oriented polls, which tend to be more accurate.” 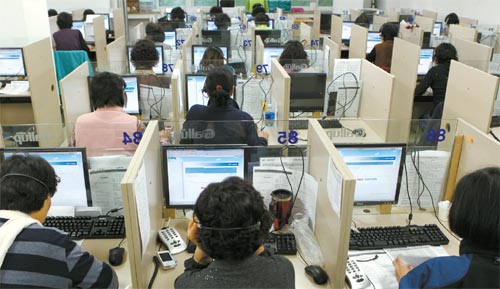 Employees at Gallup Korea call eligible voters nationwide in May before the June 2 local elections, at the company’s main building in Seoul. [JoongAng Ilbo]

Last-minute breaking news right before the election was cited as another key reason for the inaccuracy of opinion polls this year, according to experts. Playing particularly important roles in shaping opinion in the final days were the chaos surrounding the government’s handling of the Cheonan probe, the comedian Kim Je-dong’s cable talk show being allegedly halted due to his hosting of the memorial service on the first anniversary of the death of former President Roh Moo-hyun and Buddhist monk Munsu’s self-immolation to protest the administration’s controversial four rivers project.

The situation - minus television, text messages and Twitter - is reminiscent of the 1948 presidential election in the United States, when a similarly swift reversal of fortune put incumbent President Harry S. Truman back in office for four more years instead of serving up the win predicted for conservative rival Thomas E. Dewey. As they did in the lead-up to the Korean election, media outlets and political experts put their trust in the polls carried out by pioneer George Gallup in the weeks before the election on Nov. 2, 1948, so much so that the Chicago Tribune printed a famously incorrect banner headline, “Dewey Defeats Truman,” on election night for the following day. Many political experts estimated that a large portion of Dewey’s supporters were swayed at the last minute by Truman’s claim that an economic depression could return in a United States under Republican control. 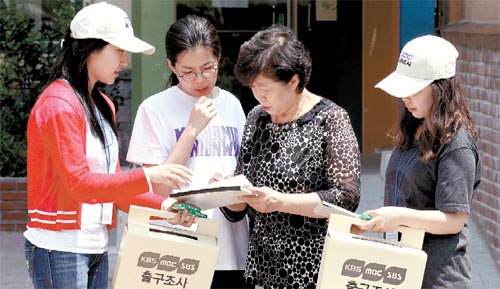 Citizens participate in an exit poll carried out jointly by KBS, MBC and SBS in front of Gongdeok Elementary School in Mapo District, Seoul, after they voted on June 2. [YONHAP]

Leaving aside problems with methodology, humanity’s occasional unpredictability leads to shifts that are hard to measure.

After the election, many pundits cited a phenomenon in political science known as the “spiral of silence,” in which a person is less likely to voice an opinion on a topic if that person perceives that he or she is in the minority, for fear of reprisal or isolation.

“Just as the spiral of silence would imply, public opinion polls measure someone’s feelings toward something or someone at that particular time, so there is always a possibility that the feeling or opinion will change,” said Rhee. Or, of course, the voter might express in the privacy of the ballot box what he or she is reluctant to tell a pollster over the phone.

Social researchers still argue that despite their faults, opinion polls are still the most scientific method to measuring the majority opinion on certain issues.

“There is no absolute means to measure the public’s thoughts perfectly at any moment,” said Rhee.

“In order to improve Korean opinion polls, however, there must be government regulation and caution from the private sector in trying to weed out low-quality public opinion polls. Also, clients must think outside the box and stop relying solely on approval rating polls.”