Jong ‘only wanted to play for North’

Jong ‘only wanted to play for North’


JOHANNESBURG - The North Korean national anthem was played at the World Cup yesterday for the first time in 44 years, as North Korea took on Brazil at Ellis Park Stadium in Johannesburg.

Tears streamed down the face of an emotional Jong Tae-se, North Korea’s star forward. A similar scene played out in the stands, where a misty-eyed Ri Jung-geum, Jong’s mother, stood in the stands with a group of North Korean supporters.

“Although he [Jong] was born in Japan, it’s a great honor for him to be a part of the first North Korean squad to compete at the World Cup in 44 years,” Ri told the JoongAng Ilbo. 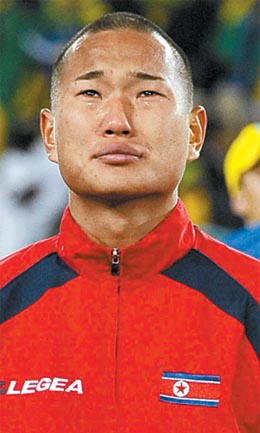 It’s understandable that Jong was overcome with emotion. Consider his past, and the ups and downs he went through before he was able to dress for North Korea. Born to South Korean parents in Nagoya, Japan, Jong held a South Korean passport. Ri taught her son about his roots at an early age.

Jong was enrolled in schools for pro-Pyongyang Koreans in Japan, but he encountered a lot of bias growing up. The zainichi - “foreign Koreans” in Japan who support the Northern regime - face discrimination from the Japanese. The young Jong learned that he could overcome the difficulties by focusing on football, and he worked out his frustrations on the field.

“My son could have played for the South Korean national team, but he only wanted to play for the North,” said Ri. “His dream finally became a reality and now he is playing on the world’s biggest stage.”

Ri said she speaks with her son often.

“Tae-se tells me the morale is high and he feels like a part of the family on the team,” she said. “Even manager Kim Jong-hun treats Tae-se like his own son.”

Ri also showed a lot of interest in the South Korean national team.

“I watched South Korea defeat Greece in their opening match. Park Ji-sung is playing really well. I like him,” she said.

With North Korea trailing by two goals late in the second half, Jong headed a pass to teammate Ji Yun-nam, who managed to score. Ri rose to her feet and cheered wildly.

“They played well. I wish the two Korean teams can meet in the finals,” said Ri. “I plan on going to the match between South Korea and Argentina to root for the South. I truly hope South Korea wins the match.”