Ready to go head to head

Ready to go head to head 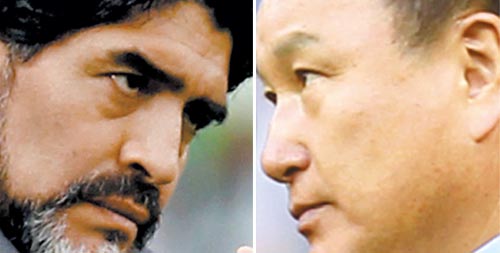 PRETORIA, South Africa - It’s the day of the big match. Korea’s performance against Argentina in Johannesburg tonight will provide football fans with a clearer picture of Korea’s chances of advancing to the knockout phase of the 2010 World Cup.

Coming off a convincing 2-0 win over Greece, Korean manager Huh Jung-moo and his men are aiming for a monumental upset against the South American powerhouse, but even a draw would be considered a success. It’s a loss that Korea must avoid at all costs.

The biggest factor in the game will be how well Korea defends FIFA Player of the Year Lionel Messi. Huh has spent considerable time on a defensive scheme to contain the star striker.

“We’ll work to slow down the tempo of their attack,” Huh said.

The manager believes if his players put the brakes on Argentina’s offense - which contains the likes of Messi, Carlos Tevez, Gonzalo Higuain and Juan Veron - they’ll get the opportunity to counterattack. 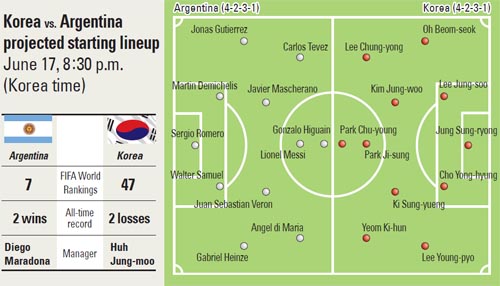 Containing the speedy Messi will come first. One of Messi’s favorite plays is the give-and-go, when he uses his quickness and ability to maneuver in tight spaces to pass as a defender approaches, then shifts to an open space to get the pass back.

It’s the type of play that Argentina manager Diego Maradona successfully used against Korea at the 1986 Mexico World Cup.

“Twenty-four years ago, we merely increased the number of defenders without any positive results. We’re not going to succumb to that kind of outcome this time around,” said Huh.

Instead of having a single player shadow Messi, Huh will likely employ a zone defense to cut down on the passing lanes and open spaces in which Messi can maneuver. Korea used this strategy in a friendly match against Spain earlier this month, with some success. Although Korea ended up losing the match 0-1, the players were able to contain the likes of Cesc Fabregas and Andres Iniesta.

Huh will also direct his men to force Messi to dribble with his right foot instead of his favored left, which should give two or three Korean defenders the chance to force turnovers. Spain’s Valencia and Italy’s Inter Milan have been successful against Barcelona and Messi using such tactics in the past.

One of the question marks for Argentina is the right fullback position. Maradona is said to be considering three players: Jonas Gutierrez, Clemente Rodriguez and Nicolas Otamendi. Gutierrez is a natural midfielder who can play the role of an attack-minded fullback and Rodriguez is the only natural fullback of the group, while Otamendi is a central defender who can play the role of a stay-at-home defender.

Juan Sebastian Veron is also day-to-day with a right calf injury and Maxi Rodriguez might start in his place.

Huh will likely start Oh Beom-seok at right fullback instead of Cha Du-ri. As for wingers, he may go with Yeom Ki-hun at left wing or use Lee Chung-yong at left and start Kim Jae-sung at right wing. Whoever starts at left wing will be expected to initiate the attack up the right side of the field and provide crosses to his teammates.

If Gutierrez gets the nod, Park Ji-sung will be expected to make good use of the open space created when Gutierrez contributes to the attack.

Park will also have a shot at setting a new Asian scoring record. He is currently tied with teammate Ahn Jung-hwan at three for the all-time most goals at the World Cup among Asian players.