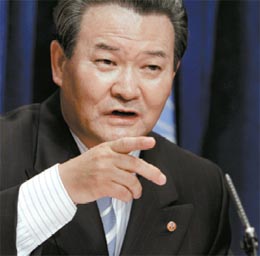 Sin, at a press conference at the UN yesterday, said Seoul and Washington conspired together to fabricate evidence in order to blame the North for the tragedy, in which 46 sailors died.

“The result of South Korea’s civilian-military joint investigative group is a complete fabrication from A to Z,” Sin said yesterday, New York time. Sin said he would be “left with nothing to do as a diplomat” if the council, despite intense protests from Pyongyang, slaps any forms of punitive measures on the country.

“The next step will be for our military to step forward and fix this,” he said, adding the target of any military action is “certainly South Korea.”

Seoul is trying to get the UN Security Council to officially condemn North Korea for attacking the warship, a claim Pyongyang vehemently denies.

In a rare public event for North Korean diplomats at the UN, officials repeated the arguments they put forward in a closed briefing for the council’s 15 member countries on Monday. Sin was skeptical of the international experts who took part in South Korea’s monthlong investigation.

In its own briefing for the council Monday, South Korea invited naval and submarine experts from the U.S., Britain, Canada, Australia and Sweden to testify they had taken part in all areas of the probe from beginning to end.

After Sin spoke for 30 minutes, a Japanese reporter asked what he thought about the response from the council, where, he said, “most member countries” believed South Korea’s presentation over the North’s.

“What do you mean by ‘most of them?” Sin shot back. “Do you mean that South Korea’s Naro satellite that blew up 700 kilometers up in the air was also attacked by a North Korean torpedo?”

Sin’s quirky answers continued. When an American reporter asked if there was any possibility that the North’s hard-line military officers may have ordered the attack, Sin said: “Our military is strong.”

When asked about Pyongyang’s possible response if the council agrees to censure or enact punitive measures, Sin said, “I will lose my job, but our military will make a ruthless response to that kind of provocation and achieve unification.”