South Africa: Don’t write us off yet

South Africa: Don’t write us off yet 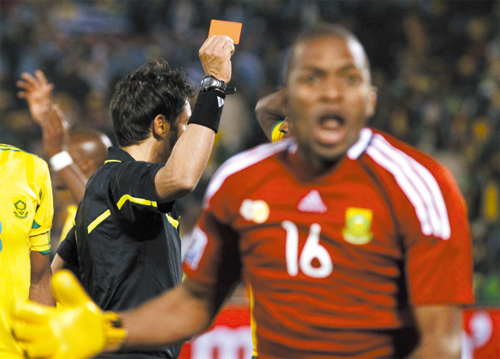 The World Cup hosts now need to win their final group game against France to stand any chance of progressing to the knock-out stages.

“It was a good strike from Forlan, but there was absolutely nothing we could do about it, it’s just one of those things that can happen in football,” said Mokoena about the Atletico Madrid forward’s first.

“The important thing is to move on and forget what’s happened. We still have a game to play, and that’s really important.”

The 29-year-old felt that his team hadn’t show enough maturity to beat the South Americans, but the big turning point was the penalty. Goalkeeper Itumeleng Khune was sent off for bringing down Luis Suarez, after which Forlan scored from the spot to make it 2-0.

“We have got to show faith. In the first 15 minutes Uruguay provoked us and we fell into their trap and stopped playing our football.

“The penalty, everyone can talk a lot about it. That changed our shape and changed the game altogether.”

Everton midfielder Steven Pienaar said their final group match against France would be like a Cup final.

“It’s a bit sad now, we’re disappointed we lost, but we have to lift ourselves up. It’s not over,” he said. “We have to hope [today’s] game [between France and Mexico] goes in our favor, we’ll hope for a draw. Then we have a Cup final to play against France.”

Moneeb Josephs, who replaced Khune in goal, said the crowd in Bloemfontein will have a big role to play against France on June 22.

“It’s going to give us a big, big advantage and we need everything we can get,” he said. “People have been writing us off since the beginning of the tournament, so that’s nothing new. AFP