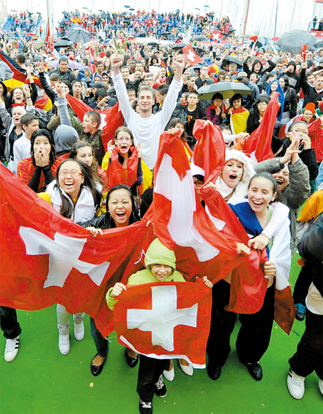 Swiss football fans celebrate at the end of the FIFA 2010 World Cup group H match between Switzerland and Spain, at a fan zone in Lausanne, Switzerland, on June 16. [AP/YONHAP]

JOHANNESBURG - Switzerland scored this World Cup’s biggest upset on Wednesday with a win over fancied Spain, and Chile won their first World Cup victory in nearly half a century.

The shock of the tournament so far unfolded in Durban, where Spain dominated possession but were undone by a bundled-in goal from Cape Verde Islands-born midfielder Gelson Fernandes. The Swiss won 1-0.

“To be fair, I’m not used to scoring goals, so it was a surprise,” Fernandes said. His goal sent the normally restrained Swiss rushing to the streets back home in celebration with red-and-white shirts plus African-style vuvuzela horns.

In Wednesday’s other match, Chile defeated Honduras 1-0 thanks to a Juan Beausejour goal. It was Chile’s first win in a World Cup match since they hosted the tournament in 1962.

Honduras at least registered a World Cup first by calling up a third member of the Palacios family - Jerry - meaning they now have an unprecedented three brothers in their squad.

Wednesday’s five goals in three games did not really answer criticism that Africa’s first World Cup has been short on excitement.

There have been just 28 goals scored in the opening 17 games - an average of 1.65 per game, far fewer than even the record low of 2.21 goals per match at the 1990 World Cup in Italy. Players and coaches have been criticizing the new Jabulani ball, the altitude and the droning noise of the vuvuzelas.

Yet it’s still surprising that so many big names - from Cristiano Ronaldo and Fernando Torres to Wayne Rooney and Didier Drogba - haven’t managed to find the net.

Spain saw themselves replaced by Brazil as favorites after their loss to the Swiss, who hadn’t beaten them once in 18 previous meetings, according to British bookies Ladbrokes. Wednesday’s failure will deeply worry the 2008 European champions, who have a track record of failure at the World Cup.

“Their ‘underachievers’ tag may not be confined to the history books just yet,” Ladbrokes spokesman Nick Weinberg said.

The defeat was the latest failure by most of the World Cup big guns to meet expectations. Brazil also struggled on Tuesday night to break down the North Koreans before winning 2-1.

Even with an inspiring performance by world player of the year Lionel Messi, Argentina only managed one goal in their win over Nigeria. England drew international mockery with a goalkeeping gaffe that gave the United States a 1-1 draw.

Of the traditional heavyweights, only Germany have really shone, with a 4-0 thrashing of below-par Australia.

Argentine coach Diego Maradona had his mind on outwitting his South Korean counterpart Huh Jung-moo during last night’s clash. As players, the pair met in a 1986 World Cup match, with Huh detailed - but failing - to stop Maradona.

But Maradona still found time to create a fuss with attacks on fellow football greats Pele and Michel Platini. Responding to criticism of his coaching, Maradona said that the Brazilian “should go back to the museum.” Of the UEFA president and former French captain Platini, he added, “We all know what the French are like and Platini as a Frenchman thinks he knows it all.”

And in a sideshow that has raised eyebrows, a South African court released two Dutch women accused of an illegal promotional stunt by a brewer on a 10,000 rand ($1,319) bail and will hear the case in a week.