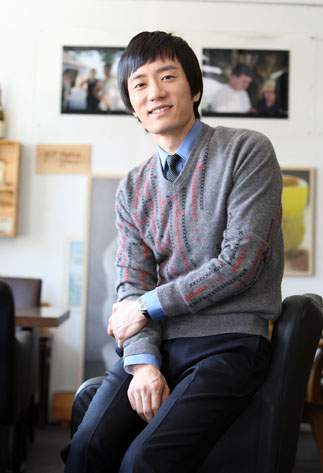 Actor Kim Myung-min is known for throwing himself wholeheartedly into a role. For his continuing attempts to give something of himself whenever he does a new project, the public has given him the nickname Myung Bonjwa in Korean, a moniker that might make a modest actor such as himself blush for all the adulation it contains.

The “Myung” comes from his name, and “bonjwa,” means “guru.”

When he took the role of a ruthless taxi driver in the horror flick “Sorum” (2001), he actually worked for a taxi company in Seoul for three months. He was a lesser-known actor at that time, and nobody thought he would go to such lengths to research the role. But his hard work paid off and Kim succeeded in gaining recognition for himself for the first time in his five-year acting career.

When he played the role of a man with Lou Gehrig’s disease in the film “Closer to Heaven” (2009), he stunned the public after shedding nearly 20 kilograms (44 pounds) in just three months to prepare for the role.

This summer, Kim returns to the big screen with his new film “Man of Vendetta,” which is set to be released next month.

For this film, his sixth, Kim doesn’t have to alter his physique. The transformation is psychological.

Kim plays Ju Young-su, a minister with a happy family with a beautiful wife and daughter. When his daughter is kidnapped, his life is turned upside down and he begins to question his faith.

What intrigued Kim was the emotional transformation his character goes through.

“In this character, three different people coexist. Ju is a minister who tells his followers to love their enemies, but he denies the existence of God after he loses his daughter. He swears, spits and fights,” Kim said at a recent press conference in central Seoul.

“After he realizes his daughter is still alive eight years after she was kidnapped, he becomes a devoted father who is ready to do anything he can to get his daughter back.

“Although I was afraid of taking this role [because of its complexity], I could relate to my character’s desperation.”

When asked whether he was hesitant to play someone who denies the existence of God because he himself is a faithful Christian, he said, “No. Since I’ve been going to church even before I was born, I was confident about playing a minister. And we have two ministers in my family, so my father was very proud of me when I told him that I was playing one in my new film. He said that portraying a minister is a blessing from God.

“But he doesn’t know that my character becomes a man who doesn’t believe in God,” Kim said with laugh.

At one point in the film, Kim’s character doesn’t sleep for three days, so Kim did the same. “I didn’t want to shoot the scene after I had slept for eight hours,” he said.

Because he becomes so involved with the characters he plays, Kim says he often finds it is difficult to get his life back to normal after he finishes shooting a film or drama.

Kim once told a local newspaper that he suffered from depression after he finished shooting the hit TV drama “White Tower” (2007), in which his character dies of cancer. The drama was based on a Japanese drama of the same name.

“I could understand why the Japanese actor who played the same role I did killed himself after the drama,” Kim recalled. “After we finished shooting, I felt drained by the tragic ending, too.

“But this time is very different because it’s happy ending. I felt good, as if I had a huge weight lifted off of my back.”