Commoners’ pottery at the royal court

Commoners’ pottery at the royal court 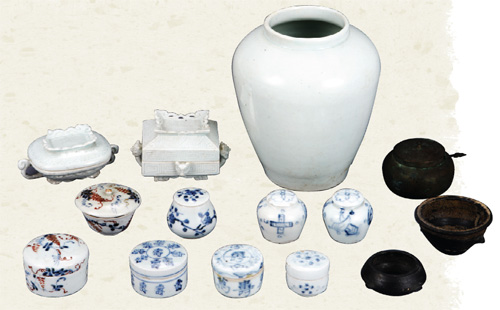 This burial ware set discovered in the tomb of Prince Euiso, the elder brother of King Jeongjo, is now on display at the National Museum of Korea. Provided by the museum

One could be forgiven for not being familiar with buncheong stoneware, sandwiched between the beautiful white porcelain of the later Joseon Dynasty (1392-1910) and the striking celadon of its predecessor the Goryeo.

But even those who are aware of the vessels would be surprised to hear that they were once used in official ceremonies by the Joseon royal court. Buncheong’s somewhat freewheeling artistic reputation would seem incompatible with the precision Joseon notoriously demanded from its ceremonial instruments.

Now we can see for ourselves, with 120 buncheong ritual vessels from the 15th century on display on the second and third floors of the Horim Art Center, one of Korea’s biggest private museums, located in Sinsa-dong, southern Seoul.

“The state rituals called girye were important, intended to show the authority and dignity of the court in Joseon, a Confucian country,” the museum explained in a statement. “So vessels for the rituals were manufactured under rigorous standards.” 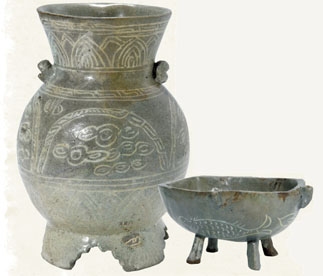 The Buncheong ware as ritual vessels of the Joseon court in the 15th century, including Hojun, far left, and Bo, left, are being exhibited in Horim Art Center. Provided by the museum

The girye included rituals for good harvest and commemorative rites for Confucius and ancestors at court.

“Metal was preferred as a material. However, in the early Joseon Dynasty, metal was in short supply due to the active manufacturing of weapons and coins,” the museum continued. “So, buncheong, which were prevalent at the time, were used as ritual vessels.”

Buncheong, grayish pottery coated with white powder, started as less luxurious versions of Goryeo celadon, which boasted a beautiful jade color, as the Goryeo fell and the Joseon began to rise. The pottery style came into its own in the early Joseon but gradually disappeared after the 16th century, with the rise of pure white porcelain.

The buncheong ritual vessels on display reflect old East Asian philosophies and Confucianism. Based on the traditional vision of the universe, with the sky as round and the earth as square, two kinds of vessels were used for crop offerings to the heavens, the round-shaped “gue” and square-shaped “bo.”

Also among the exhibits are vessels shaped like an elephant and a bull in which clear water was carried. And there are jak, wine cups with three legs, which were only for rituals and never used in daily life. The set was used by ritual participants to wash their hands. Of course, incense burners, which were though to call spirits down from heaven to earth with their fragrant smoke, are also on display.

“Even researchers of the history of Korean ceramics had few chances to see buncheong as state ritual vessels of the Joseon Dynasty,” said Yu Jin-hyun, curator of the exhibition. “The exhibition will give a good chance to those researchers.”

It’s also a good chance to experience the permanent exhibits of the museum on the fourth floor, which includes white porcelain with blue patterns designated as National Treasures and other precious pieces.

Separately, at the National Museum of Korea in Ichon-dong, central Seoul, a special exhibition of white porcelain ritual ware started on Tuesday.

In particular, the exhibition boasts four sets of white ceramics buried in the tombs of four relatives of Jeongjo, the 22nd king of Joseon, the museum said in a statement.

“Each burial ware set includes a big jar, which shows the people’s belief that the deceased would need a jar to carry food and other necessities in it for the afterlife,” said Gang Gyeong-nam, curator of the exhibition.

“And we found white powder and beeswax, used as makeup at the time, in some burial vessels including that of Prince Euiso,” Jeongjo’s elder brother who died young, he said. “We came to realize through scientific investigation that the burial ware sets included vessels for cosmetics, even if the deceased was male.”

The White Porcelain Jars exhibition runs until Nov. 14. Admission is free. The museum opens at 9 a.m. and closes at 9 p.m. on Wednesdays and Saturdays. It closes at 7 p.m. on Sundays and at 6 p.m. on other weekdays and is closed on Mondays. Head to Ichon Station, line No. 4, exit 2. For more information, visit www.museum.go.kr.