Religious leaders unite to plead for aid for North

Religious leaders unite to plead for aid for North 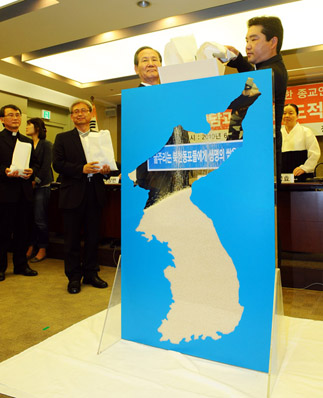 South Korean civic activists pour rice into a box bearing a picture of the Korean Peninsula during a press conference in Seoul yesterday. [NEWSIS]

Leading figures from the nation’s five major religions are urging the government to resume the humanitarian aid to North Korea that was suspended when tensions rose after the Cheonan tragedy.

Calling themselves the Gathering of Faith Praying for National Reconciliation and Peace, the religious leaders held a press conference in Seoul yesterday to warn that without outside help, the reclusive communist nation could face a food crisis as severe as the 1990s famine. Some reports have estimated that several million people died in that disaster.

“The biggest victims of the military confrontation between South and North Korea are our North Korean brethren, who have been forced to the edge of starving to death,” the group’s representatives said in a joint statement.

“We sincerely urge the government to swiftly resolve the suffering of North Koreans being overlooked even by their own government, by making an all-out effort on humanitarian aid.”

It was the first time that representatives of the five religions - Protestant, Catholic, Buddhist, Won-Buddhist and Chondogyo - have united their voices since the Cheonan warship sank in the West Sea along with 46 of its sailors on March 26.

A South Korean investigation blamed the North for the attack. The Ministry of Unification announced on May 24 that it would sever all inter-Korean trade and aid, except for aid funneled for North Korean children.

Some of the religious leaders said the North Korean government is to blame for the food shortages. According to the group, Kim Jong-il’s regime stopped distributing food last month after the North’s failed currency reform took a further toll on an economy already weakened by international sanctions. The number of North Koreans dying from hunger surged in May, the group said.

“Despite such suffering, the North Korean government repeats its threat to turn Seoul into a ‘sea of fire,’ which makes me feel angry and sorry,” Kim Hun-il, a Catholic priest, said during the press conference.

But he added that the South’s government will be just as guilty if it takes an eye-for-an-eye approach and ignores the afflictions in the North.

Other religious leaders who attended the press conference included the Rev. Pom Nyun, a Buddhist monk who chairs the Peace Foundation, and Kim Sang-bok, the senior pastor of Hallelujah Community Church, one of the country’s largest protestant churches. The group said the joint statement was signed by 527 religious leaders, including 122 Protestants, 108 Buddhists and 66 Catholics.