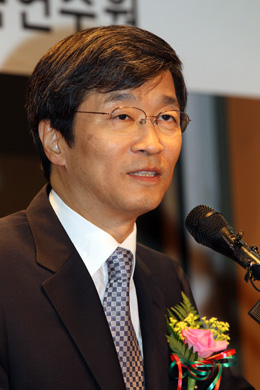 Even before he takes office, Seoul’s liberal education chief-elect is facing mounting criticism that his actions aren’t matching up with his words.

Kwak No-hyun had promised that he would represent the interests of all teachers, not only those who belong to the Korean Teachers and Education Workers’ Union, whose support he received during his campaign.

But according to a document obtained by the JoongAng Ilbo on Wednesday, Kwak has already formed seven task forces to implement his election pledges - and of the 66 task force team members, 28, or 42 percent, are involved in the Korean Teachers and Education Workers’ Union and the rest are from liberal organizations.

Sources said his aides only asked the conservative Korean Federation of Teachers’ Associations to participate yesterday, two days after the task force teams held their first meeting. The federation rejected the offer.

The teams are expected to take up measures including preventing corruption; introducing free school meals; and restoring confidence in public education to cool down the overheated private-education market.

Kwak, a presidential adviser under late President Roh Moo-hyun, rejected the idea that his policies would be biased by input only from liberal concerns. He said the goal of the task force teams are “just to review my election pledges before I’m sworn into office on July 1.”

Last Friday, Kwak told the Joong-Ang Ilbo he is not advocating either side of the divide, but represents the Korean Teachers and Education Workers’ Union and Korean Federation of Teachers’ Associations equally.

“I work with people who aspire to realize true education. The Korean Teachers and Education Workers’ Union is just one of them,” he said. “There are some union officials whose thoughts go against the current public sentiment, and there are some issues that the union and I don’t agree on.”

And one of his aides said the task force teams rely heavily on teachers’ union members precisely because his official transition team does not.

“Many people pointed out that the transition team doesn’t have experts with field experience in elementary, middle and high schools,” the aide said. “That’s why the task force teams were created: to invite school teachers to find ways to effectively implement Kwak’s election pledges.”

Some observers, however, are worried that Kwak will not abolish the task force teams once he takes office, and will rather install them as an advisory body. The task force team document obtained by the JoongAng Ilbo says that one of the teams’ purposes is to serve as an education policy think-tank after Kwak begins his term.

“I see it’s highly likely that the task force teams will intervene to establish and implement education policies after Kwak becomes the new Seoul education chief,” an official with the transition team said Wednesday.

Officials from the Korean Federation of Teachers’ Associations said they will inform Kwak’s transition team about their own education policies and goals, and added that they are looking forward to seeing Kwak keep his promise to represent both the conservative and liberal factions fairly.

“We seriously considered joining the task force, because we were told the team members would be chosen for their expertise, not their ideological values,” said Kim Dong-seok, a spokesman for the Korean Federation of Teachers’ Associations. “But once we confirmed that a lot of the task force team members share the perspective of the teachers’ union, we decided not to participate.”