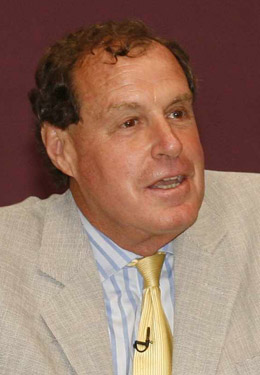 Korea’s new green-growth think tank intends to help any country with “strong interests in exploring how they can move from high-carbon based developing plans” - and will send teams of analysts to help custom-fit those plans to each country, one of its vice chairmen said yesterday.

Stanford University professor Thomas C. Heller, a vice chair of the newly launched Global Green Growth Institute, said in an interview that it’s possible to “increase wealth to have cleaner technologies with less destruction of the environment,” and that Korea is ideally situated to show other countries how-to when it comes to quick development.

“South Korea has moved into another phase of development that [President Lee Myung-bak] recognizes from his own memory of poverty: the importance of assistance,” Heller said.

Heller also emphasized that Korea will not be the only player in the global shift to green growth.

He cited Lee’s speech on Wednesday, in which he stated his desire that the institute develop into an intergovernmental organization to assist growing countries by 2012.

First up to receive help for economic change will be China, Brazil, Indonesia and Ethiopia, Heller said.

He said the Global Green Growth Institute would help them “substantially reduce carbon emissions that are associated with each increment of growth.”

Heller expressed concern that climate negotiations are at a very difficult state worldwide, and there is “no single recipe” for the task Global Green Growth faces.

“There is change in these negotiations, but I expect them to be slow. The search for global agreement that has been with us now since 1992 remains elusive,” he said.

But the professor remained upbeat about the think tank, promising “concrete achievements” within a year or two.

Heller is currently the co-director of Stanford University’s Rule of Law Program and the Stanford Program in International Law. He has been appointed to a small team of board members that include Lord Nicholas Stern of the London School of Economics and former Prime Minister Han Seung-soo.

The Global Green Growth institute began as a suggestion by President Lee at the Copenhagen climate summit in December last year. It is the first of its kind. christine.