The value of giving it all away

The value of giving it all away 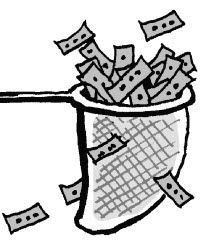 The ancient Chinese philosopher Zhuangzi once said that trying to protect one’s wealth is like trying to keep thieves away. He said that one ties pouches, closes boxes and locks doors to protect one’s possessions. But the wise man will take the heavy boxes and pouches with him, because he will be worried about whether the ropes and locks will come loose in the face of a brazen thief. Thus what is truly wise is to keep one’s wealth safe from thieves who are bold.

The Bible warns that it is easier for a camel to go through the eye of a needle than it is for a rich man to enter the kingdom of God, even though there is a controversy about the translation. Skeptics maintain that in the original Arabic the word used was “gamta,” or “rope,” but that the person who copied the book mistakenly changed the word to “gamla,” or “camel.” In reality, it’s difficult to imagine either rope or camel going through the eye of a needle.

Koreans also have sayings about wealth. One of them is: “Regard gold as if it were a piece of stone.” It was said by the father of General Choi Yong of the Goryeo Dynasty (918-1392) on his deathbed. The general could easily have had fame and fortune, but he remained all his life a man of integrity and frugality. He was not greedy and it is said that there was not even one blade of grass growing on his grave. This shows us that everyone comes to this world with empty hands and leaves the world with the same.

It is in that vein that the chairman of Microsoft, Bill Gates, and the investment guru Warren Buffett have launched a campaign that asks the wealthy to donate at least half of their net worth to charity. Their first meeting in May 2009 was attended by David Rockefeller, the grandson of the founder of Standard Oil, New York City Mayor Michael Bloomberg and Oprah Winfrey.

Their targets are the people on Forbes’ list of the 400 richest people in the United States, and if all of them were to participate in the campaign the amount collected would reach $600 billion.

In 2006, Buffett donated $37 billion, or 85 percent of his total wealth, to the Bill & Melinda Gates Foundation. In doing so, he was following the words of entrepreneur and philanthropist Andrew Carnegie, who famously said that it is a disgrace for a man to die rich. And Buffett has said that if one leaves too much money to one’s offspring, they could end up doing nothing.

Kim Man-deok, a successful trader during the Joseon Dynasty (1392-1910), also gave of himself. After Jeju Island residents suffered the effects of a poor harvest he donated all his assets to them to help them survive.

These people have returned what they earned to society. We should follow their example.