Back under the big top

Back under the big top 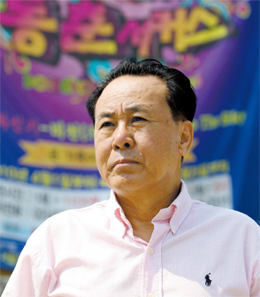 Park Se-hwan has led Dongchun Circus through some rough times in recent years, but he believes the group can survive. By Choi Jeong-dong

Dongchun Circus, the only circus group in the country, has long been a fixture in the Korean entertainment scene since its founding in 1925. In recent years it has struggled to stay afloat amid stiff competition from television, movies and high-tech gadgets, as well as a financial downturn that saw people spending less on art. It even considered closing its doors. But after the public rallied to keep the big top open, the group has held three performances a day since April at the horse race track in Gwacheon, south of Seoul, on a plot of land granted to them by the Korea Racing Authority.

When we went to the track to meet with Park Se-hwan, the group’s leader, there were only 20 or 30 people in the audience, perhaps due to the scorching weather. Still, Dongchun Circus put on a thrilling show. Later, we sat down with Park to talk about the group and his hopes for its future.

Q. Last October, Dongchun Circus announced it was closing. How did that happen?

A. In the second half of last year, our business suffered a blow from the flu season. People were avoiding crowds to keep themselves from getting the flu, and attendance was down 90 percent. We were already feeling the effects of the national financial crisis, but the flu was the tipping point and we decided to announce our final performances.

After the announcement, the public expressed a tremendous amount of interest in saving our group. Ten million members of Daum’s Agora [a major online debate forum] signed a petition to keep the group alive. The Ministry of Culture, Sports and Tourism also received countless phone calls from people testifying to the importance of the group.

Encouraged by the support, we decided to reconsider our decision to shut down. Starting on Dec. 19, we performed at Gimpo stadium for 20 days, as if they were our last shows. Despite the news that we were closing, attendance grew until we had more than 1,000 people each day, so we used the opportunity to keep the show going and it continued through May at Suwon Bukmun.

Has the danger passed?

Since we began performing at Suwon Bukmun, our monthly income has grown about 1 billion won ($831,568). I was finally able to pay my staff and I still had 4 to 5 billion won left. T

he question of whether we will survive in the long run is still unanswered, because it depends on how we do during the low season in the summer.

Have you had any help from the government?

We received support from the Ministry of Labor through its Cultural Art Creation Program, which covers the salaries of 12 staff members, 932,000 won per person per month, for a year.

But we weren’t granted any help from Arts Council Korea nor from the Culture Ministry - we were even mocked by a ministry officer who said that our performances are outdated.

Do you think he meant that circuses are a thing of the past?

When I came into Dongchun Circus in 1962, the circus was at the center of a culture that combined acting, dancing and magic.

Now, it’s very different. But I still believe we can mobilize audiences better than any other kind of performance.

When we performed at Seoul Plaza in May last year, we had about 4,000 to 5,000 people, the biggest audience in the plaza’s history.

What is the secret to attracting such large audiences?

The circus can be enjoyed by people of every age. And there is no language barrier. Anyone can understand and enjoy the thrill of the circus. That is why the circus is the most popular form of entertainment in the global tourism industry.

What do you want to do once you’ve secured the group’s future?

This is not just a matter of saving Dongchun Circus. I want to save the genre - the circus itself. The circus can contribute to a lot of areas of life. Even if one doesn’t become an acrobat, one can still learn agility and boldness.