From dictatorship to democracy

From dictatorship to democracy 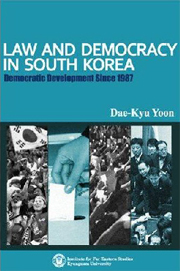 The year 1987 was a defining moment in the development of democracy in South Korea. The constitutional revisions that took place in 1987 mark the turning point in Korea’s transition from authoritarian rule by military dictators to democratic rule of the people, by the people and for the people.

Prior to 1987, there had never been a peaceful transfer of political power in modern South Korea; since 1987, power has been transferred peacefully from a former military general associated with some of the worst human rights violations under the previous military regimes, to a civilian and former democracy activist who had joined the ruling party, to the leader of the opposition party, to a former human rights lawyer, and finally to the current president, a former business executive and mayor of Seoul.

This is remarkable enough, but it is only the tip of the iceberg.

Since 1987, Korea has made tremendous strides in legitimizing its political processes by combating corruption and enhancing transparency, achieving judicial independence, and extending and protecting human rights. A time traveler from the early 1980s would barely recognize the Korea of today, and not just because of all the new buildings.

Korea today is simply a different place, and the changes in the law and legal institutions brought about by the democratic movement which forced the 1987 constitutional amendments have played a prominent role in this transformation.

In 1990, Professor Dae-Kyu Yoon published “Law and Political Authority in Korea,” a groundbreaking study of the political use and abuse of law and the judiciary in Korea leading prior to the 1987 constitutional revisions. The book demonstrated that Korea was then a country ruled by law, but not a country with the rule of law, the distinction being that the law and legal institutions were used by the military strongmen as a tool for controlling the people rather than being a check on the abuses of power by such leaders.

All of the formal institutions of a democratic society were in place, but only in form and not in function.

The judiciary was not independent, the legislature was in no position to disobey the directives of the president, and the laws on the books were of little comfort to those who found themselves in the crosshairs of the state’s police power. As Professor Yoon pointed out, the law in such a society functions in the service of, and at the mercy of, state power.

Since 1987, all of this has changed, but until now no scholar has stepped forward to provide a comprehensive and coherent analysis in English of how these changes took place: how the law was harnessed by the people to serve democratic ends, and how this process conferred legitimacy to the law and legal institutions, ironically giving the law more power to function independently of any particular segment of society which might wish to manipulate the law for its purposes.

Thankfully, Professor Yoon has once again produced a highly readable book, accessible to both the layperson and the scholar, entitled, appropriately, “Law and Democracy in South Korea: Democratic Development Since 1987.”

This book is a must-read for anyone with an interest in Korean history, Korean law and society, and more generally how a society can in a generation transform itself from within from a brutal military dictatorship to a flourishing democracy.

The book is arranged in five sections, logically arranged but still written such that a reader may choose to skip to the sections which are of most interest.

I advise reading the book cover to cover, however, for a full sense of the short but sweeping history which the book manages to palpably convey.

The first section is a review of the history of modern Korea leading up to the 1987 reforms, giving the reader an idea of the utter paradigm shift that these reforms represented.

For a more complete history of this period, the reader is directed to Professor Yoon’s previous book.

Professor Yoon notes that the changes in the law by themselves would not be sufficient to bring about any real change.

Rather, the changes in the law reflected an engaged and empowered electorate, which then conferred legitimacy and power to the law in order to achieve a society governed by the predictable, fair and evenly applied rule of law.

Concurrent with and essential to these reforms was a dedicated effort to root out and eliminate corruption in the political process, an effort which continues to this day.

Section Three turns to the judiciary, analyzing how the separation of the powers of the state came into practical application, and how the newly independent judiciary began to find its feet and engage in judicial reform and activism.

Most importantly, the establishment of the independent Constitutional Court was critical. At the time, many doubted that it would function effectively, especially given the predicted turf wars with the Supreme Court, but the Constitutional Court has emerged as one of the most important institutions in the expansion and protection of democracy and human rights in Korea.

Section Four contains several chapters addressing human rights and social justice, such as criminal procedure, the protection of minorities and the indigent, the development of labor law and the status of women.

Professor Yoon also describes the creation and development of the National Human Rights Commission, which has evolved into a powerful voice for human rights and redress for citizens, despite its lack of judicial or police powers.

Section Five addresses South Korea’s relationship with its wayward cousin to the north. This may seem like an afterthought in a book about South Korean democracy, but Professor Yoon points out that it is only the democratization of South Korean society which has allowed it to approach North Korea with more understanding and with offers of humanitarian assistance rather than mutual threats of destruction.

Prior to the reforms in South Korea, the authoritarian governments on both sides of the 38th parallel used the constant threat of war as a justification for their repressive policies and human rights violations.

With democratization, the demonization of the North was no longer needed to justify the South Korean government, as it enjoyed legitimacy from within, and thus President Kim Dae-jung was politically free to approach North Korea differently.

Only reform in the South made rapprochement with the North a politically viable alternative.

The book has much else to recommend it, but its primary strengths are the coherency of the narrative it provides, the insights into modern Korean history which the reader gains in viewing developments through the lens of the law and legal institutions, and the very readable manner in which Professor Yoon illustrates his points with examples from recent events in Korea.

This is another classic for anyone interested in Korea, and the perfect sequel to Professor Yoon’s previous seminal book on law in South Korea.