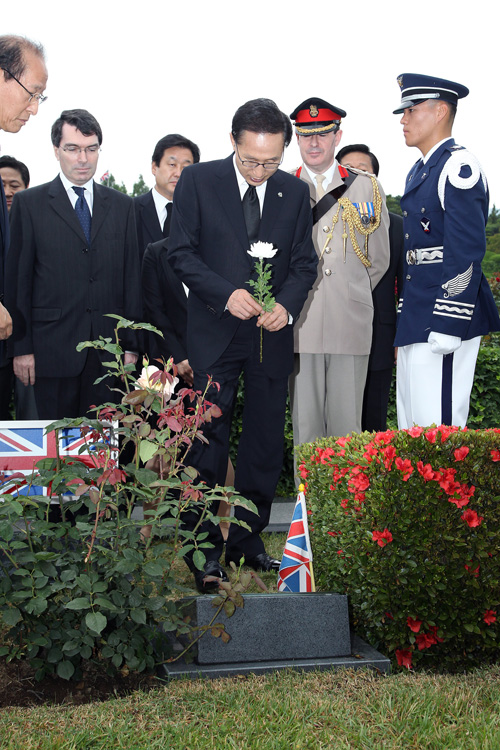 President Lee Myung-bak lays a flower before a grave at the UN Memorial Cemetery in the southern port city of Busan yesterday. [YONHAP]

President Lee Myung-bak visited the UN Memorial Cemetery in the southern port city of Busan yesterday, a move his aides said was aimed at sending a message of peace to the world as the two Koreas mark the 60th anniversary of the outbreak Korean War next week amid rising military tensions after the deadly sinking of a South Korean naval ship in March.

The cemetery is home to about 2,300 UN troops from 11 nations who were killed in the war from 1950-1853. These countries fought on the side of the South under the UN banner to repel invading North Korean forces.

“It is the first time in 44 years for a South Korean president to visit there to pay homage to those fallen soldiers,” Lee’s office, the Blue House, said in a press release. Park Chung Hee visited the cemetery as president in 1966.

Lee was accompanied by ambassadors and military attaches from all 11 countries, the release said.

“International cooperation is imperative as tensions have been escalating since North Korea’s provocation,” in the March 26 attack on the Cheonan that left 46 sailors dead, Blue House spokesman Park Sun-kyoo said.

“President Lee’s visit to the cemetery is to commemorate the troops dispatched from foreign nations and send a message of peace.”

A total of 16 countries dispatched combat troops to help the South fight against the North, while five others sent medical aid units. The UN troops suffered 40,896 casualties, according to official data.

The two Koreas have technically remained at war since their three-year conflict ended in a cease-fire, not a peace treaty. Yonhap