A STRATEGY BEGINS TO FORM
Orders to shell his own troops

Last week, General Paik explained Kim Il Sung’s fatal miscalculations and remembered meeting him near his hometown before the war. 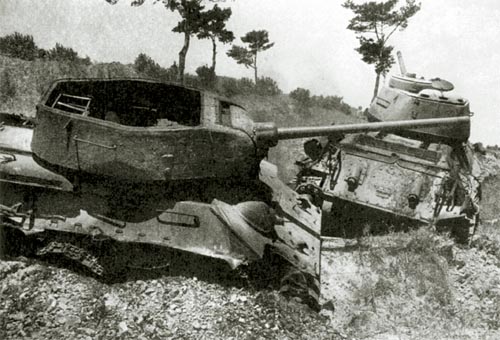 We continued to face heavy enemy fire along the Nakdong line. The axial line connecting the ROK and U.S. armies was covered, but the strong offensive from enemy troops who outnumbered and had more firepower than the ROK troops meant the “Y” line from Waegwan to Pohang, covered by the ROK 1st Division, was exposed to considerable danger.

We faced heavy enemy fire in the area covering Dabudong, the road to Daegu and Sangju, North Gyeongsang. The eastern part of the “Y” line was under heavy enemy attack, and the ROK 1st Division was in a grave situation.

I placed the ROK Infantry 15th Regiment to the left, the 12th Regiment in the middle and the 11th Regiment to the right over a line that stretched a total of 21 kilometers (13 miles). It was a risky but a necessary move, since I could not place any reserve troops behind the front lines as a second line of defense. If the enemy troops penetrated our first line of defense, we would not have any troops to stall them.

The situation had slowly grown worse since we set up our command post at the Dongmyeong Elementary School in the southern Dabudong area in early August 1950, and things got really bad after Aug. 10, when the battles intensified and the number of casualties rose. After mid-August, we faced an average of 700 wounded or dead per day. I listened in exasperation as the division adviser made his daily reports on the number of casualties.

On Aug. 13, the enemy’s 3rd Division, which was attacking the U.S. 1st Calvary to the left of us, changed course and began to attack the area covered by our 15th Regiment. In the vicinity of Mount Yuhak, the enemy’s 15th Division made incursions while the ROK 1st Division’s 11th Regiment came under heavy attack from the enemy 13th Division. Our division was left in charge of holding off attacks from three enemy divisions. 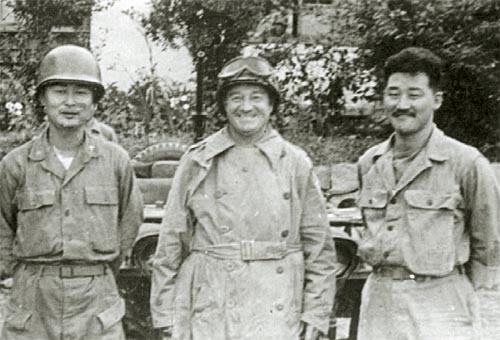 Gen. Hobart R. Gay of the U.S. 1st Cavalry, center, poses for a picture with ROK 1st Division Brig. Gen. Paik Sun-yup, left, and Col. Choi Young-hee of the 15th Regiment during Gay’s visit to Dabudong in August 1950. Provided by the U.S. Army

It was grim, and I grew absorbed with worry over the fate facing our division. But we got an unexpected break. A U.S. Army M37 three-quarter-ton truck arrived at our command post at the elementary school. An officer and two noncommissioned officers stepped out of the truck.

It was perhaps because the visit was unexpected, but I have trouble recalling the American officer’s name.

“I have something I must tell you,” said the officer. “I have with me a new weapon. It is my duty to deliver it and to also get assurances from the division commander.”

Having listened intently to the officer, I was overcome with curiosity about just what the officer had in store for us.

I inquired about the specs of these new weapons, and the American officer confidently replied, “It’s strong enough to pierce and destroy enemy tanks, sir.” 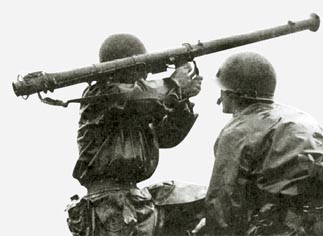 An American uses an M20 3.5-inch rocket launcher or “Super Bazooka” in battle. Provided by the U.S. Army

When I asked if it really was capable of destroying the enemy’s Soviet tanks, the officer gave me a firm, definite “yes,” putting my suspicions to rest. The officer did ask for one promise - that we be careful not to let the rocket launchers fall into enemy hands.

I received a total of five of the new rocket launchers. I gave two each to the 15th and 12th Regiments and one to the 11th Regiment.

The 12th Regiment made an immediate impact with their new rocket launchers, destroying a total of four enemy tanks. The 12th Regiment was able to secure one of the four tanks, which was in good condition. The tank was displayed in Daegu for many years and is currently in the possession of the Korea Military Academy.

With the help of the new Super Bazookas, we destroyed roughly 10 enemy tanks in total. The number is significant when considering the Soviet T-34 tanks had caused us all sorts of problems. Our M9A1 2.36-inch rocket launchers were no match for the medium-sized tanks. We now had a weapon that could effectively stop the powerful tanks. Since the new weapons were delivered at a dire time, it was a big comfort to me and I’m sure to the men under my command at that time.

War correspondents from the United States and other allied countries began to make visits to the Nakdong line. They made detailed reports of the aftermath of battles.

I guess it was big news that the ROK troops, which had been helpless against the Soviet tanks, were now destroying them with new American rocket launchers.

The growing interest also resulted in an unfortunate incident. A UN representative as well as journalists from the The Times and Daily Telegraph were riding toward the Nakdong line in a three-quarter-ton truck when it hit an antitank mine and they died on the spot.

My division still sorely needed a second line of defense. I anxiously kept a close eye on the situation. The ROK 1st Division’s 15th Regiment looked unstable. Enemy forces looked to be on course to attack Waegwan under U.S. Army control, but they instead turned about and attacked the 15th Regiment head on.

Of course, there weren’t any support troops behind the 15th Regiment. If the enemy forces managed to penetrate the front line, it could cause the entire Nakdong line to collapse.

It was then I got a call briefing me on a situation. Hill 328, in an area being defended by a battalion under the 15th Regiment, had been seized by the enemy.

I could not hesitate. I quickly hopped into a jeep, headed toward the 15th Regiment command post and went to see the regimental commander Choi Young-hee.

“Where the hell is Colonel Choi and what is going on here?” I yelled as I entered the command post.

I spotted Choi slowly getting up from the corner of the command post.

Choi was quite a character. Having come from a family that ran a linen shop in Jongno, central Seoul, Choi grew up in relative comfort and always came across as a person with a laid-back personality commonly found among aristocrats. As a civilian, he had enjoyed some of the finer things life had to offer and seemed content to enjoy life during even some of the most difficult situations.

For example, Choi had a habit of eating his meals behind a folding screen. When I spotted Choi, he was in the middle of eating behind his favorite screen. He seemed to have just been notified of the news. Choi quickly put his spoon down and stepped out of the command post to speak with me.

As I got ready to discuss the issue at hand, we spotted some of our troops retreating. They were being pushed back toward Mount Sohak to the southwest of our location. I was alarmed to witness what was unfolding in front of my eyes, but when I glanced over at Choi, his facial expression seemed indifferent.

That wasn’t all. A support unit appeared out of nowhere and joined forces with the retreating men and began to fight back. I did not have the slightest clue as to what was taking place. To my knowledge, there were no additional troops supporting the 15th Regiment.

“Where on earth did those men come from?” I asked Choi.

“I apologize. The lack of support troops forced me to gather troops without alerting higher authorities,” said Choi in an apologetic tone while scratching his head.

This was clearly a breach of military rules, but for Choi, who had to give away his 3rd Battalion to the 11th Regiment, he had no other choice.

Hill 328 was a strategically important point and its loss was crucial. However, the 15th Regiment fought hard for two days and eventually regained control of the hill. I was relieved to hear the news, but I could not compliment Choi on his effort since he had broken regulations.

In retrospect, perhaps it was Choi’s laid-back and unconventional methods that saved us during the long and humid summer of 1950. Choi would go onto serve as the minister of national defense and a lawmaker before passing away in 2006.