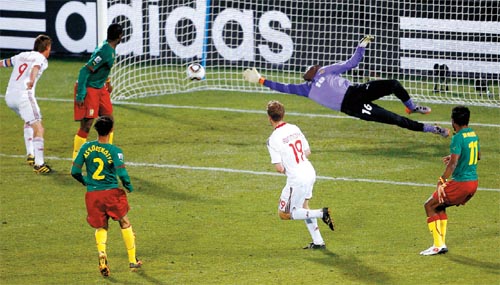 
JOHANNESBURG - Cameroon’s Indomitable Lions saw their World Cup dream shattered on Saturday, compounding Africans’ disappointment with their teams so far at the continent’s first staging of the tournament.

African footballer of the year Samuel Eto’o put a slick-looking Cameroon ahead before Denmark scored twice to win the Group E match 2-1.

That means the African team cannot progress, even though they have another game left, while the Netherlands side is sure of a second-round berth.

The Dutch beat Japan 1-0 earlier on Saturday for their second win and six points in Group E. Yet given their abundance of great striking power, it was still a disappointing display. The victory came thanks to yet another goalkeeping blunder in the tournament, this time by Japan’s Eiji Kawashima, who misjudged the flight of a belting shot from Wesley Sneijder.

“I would love to win with beautiful football, but you’ve got to deal with organized opponents,” Dutch coach Bert van Marwijk said.

Apart from the Netherlands, it has been a tough World Cup so far for Europe’s traditional football powers.

Things turned considerably worse for one of them, France, on Saturday, when fiery striker Nicolas Anelka was sent home. The 31-year-old was kicked off of the squad for insulting coach Raymond Domenech and refusing to apologize in the wake of France’s disastrous defeat to Mexico.

“The comments made by Nicolas Anelka are totally unacceptable and it was normal for us to take such a decision,” French Football Federation head Jean-Pierre Escalettes said. “Les Bleus” have just one point from two games and are on the verge of elimination, but they are not alone among Europe’s big teams.

Germany lost to Serbia, Spain fell to the Swiss and England and Italy have only managed draws.

Another hot-tempered striker, England’s Wayne Rooney, was not punished like Anelka but did issue an apology on Saturday for his sarcastic rant against fans who booed his team off the pitch after Friday night’s abject 0-0 draw with Algeria.

“I said things in the heat of the moment that came out of frustration,” said Rooney, 24, who was savaged by Britain’s unforgiving media for his poor performance and outburst.

Ghana are the only African team from the continent to win at World Cup and went to the top of Group D with a 1-1 draw on Saturday against an Australia side cursing their luck.

The Socceroos’ Tim Cahill was sent off in the opening 4-0 defeat to Germany, and it was deja vu when striker Harry Kewell was shown a red card for a handball on the line that looked harsh from TV replays. Ghana scored from the spot to equalize.

“Unless I detach my arm and put it somewhere else there is no way I can move my arm,” a frustrated Kewell said. “If we showed our true feelings, I’m quite sure we’d be fined, so we’ve just got to take it on the chin.”

Ghana’s decent showing will temper disappointment at Cameroon’s performance, though there will be an inquest in the Indomitable Lions’ camp now given dissent from senior players over coach Paul Le Guen’s team selection in the first game.