Kim being duped by subordinates

Kim being duped by subordinates 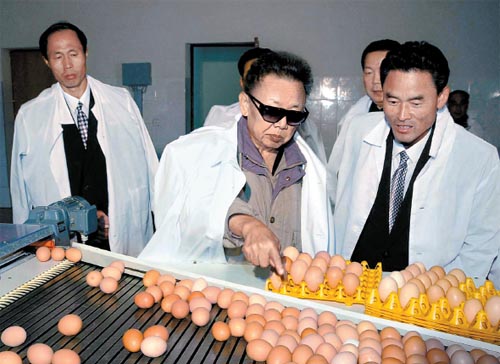 
Kim Jong-il’s subordinates are duping their leader with false or deliberately incomplete reports on national affairs, according to sources in Seoul informed of North Korean politics, a possible indication that his grip on power may be weakening.

The sources said there are two possible reasons why Kim is being cut out of the information loop. First, power may be shifting to his son Jong-un, perhaps faster than the North Korean leader desires. Other sources say the situation in the North, in particular its economy, is simply too bad for Kim’s subordinates to admit.

In either case, Kim is being prevented from grasping the full reality of what’s going on in North Korea.

“On the pretext of protecting the physical and mental health of Kim Jong-il, who still suffers from the aftereffects of a stroke he suffered in the summer of 2008, the power class [in the North] is giving selective or exaggerated reports to Kim,” said a South Korean government source, refusing to be identified. That source said some of the reports are manipulated by Kim Jong-un, Kim’s third son, who is likely to be his successor.

“Kim Jong-un, after being briefed by military leaders and the information service agents under his control on various issues, is selecting which reports go to Kim Jong-il, and which do not,” the source said.

There are signs that the North Korean leader doesn’t want his son to have such power yet. The source said Kim was recently informed by close subordinates that his son was manipulating information and, in response, ordered all reports to be given to him through his secretaries, not through Jong-un.

According to other government sources, however, many of the selective or exaggerated reports given to Kim are to prevent him from knowing how bad the economy is. After a recent failed currency reform, Kim began to demand improvement in the economy. To avoid reprimand, his subordinates are reporting that the economy is in better shape than it really is, the sources said.

For example, Kim visited a flour processing factory in Pyongyang in late January, but the factory was suffering from a shortage of wheat. To make operations look normal, Kim’s subordinates urgently secured some wheat to operate the production line during the visit. Kim stayed longer than expected, and the wheat ran out. Embarrassed, the subordinates put the completed flour through the production line a second time.

“Recently, Rodong Sinmun [the newspaper of the ruling Workers’ Party of the North] is boasting about improvement in the economy, reporting on Kim’s visits to many industrial sites, but the reality is much different from what it wants to project,” said a South Korean government official.