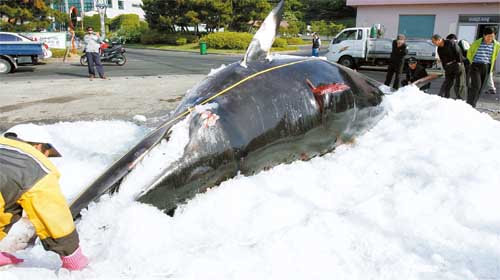 A fisherman measures the length of a minke whale, which was caught and died in a fish trap on June 3, at a port in Pohang. The 7.6 meter-long (25-foot-long) whale was auctioned for about 17 million won. By Kong Jeong-sik


POHANG, North Gyeongsang - A recent spike in illegal whale hunting - and growing demand for its meat by Korean diners - is forcing the government to decide whether to legalize whale hunts, which are currently banned.

A 7.6-meter (25-foot) long minke whale was dragged to port behind the 25-ton Dongchun earlier this month.

“I found the whale caught in traps I laid out southeast of Daebyeon port in Ulsan,” said the captain of the Dongchun, who asked to be identified by his surname Kim.

“From seeing parts of it bitten off by what looks like sharks, I reckon it was trapped two weeks ago.” The whale was covered in ice for a day before it was auctioned off the next morning at a price of 17.3 million won ($14,400).

According to the Korean Coast Guard, roughly 660 whales were caught each year from 2007 to 2009, with the whales allegedly getting caught in fishing nets and traps set for other marine life. During the same period, 243 minke whales, a bigger cetacean variety, were caught.

Fishermen auction off the meat whenever the whale gets trapped in their nets, and whales can fetch prices of 20 million won each, due to high demand in the area.

“There were only four or five whale meat eateries six years ago in the central area of Ulsan, but now there are around 20,” said Ju Tae-hwa, 59, who runs a whale meat shop in the region.

“Ordinary sushi places and also beer joints are serving whale meat as regular side dishes,” said Jeong Chim-gwi, who belongs to an environmental group in Pohang. “The demand is just growing and whale meat shops are starting to appear in Seoul.”

Thanks to that demand, illegal hunting has been on a rise to meet the growing taste for whale meat.

Last Thursday, police in North Gyeongsang arrested eight men for illegally hunting whales and supplying the meat to restaurants in the area.

They had caught 120 minke whales off the eastern coast from last May, cut them up aboard fishing boats and moved the meat in smaller motorboats, which are not obligated to report port entry and exits.

There have already been eight cases of illegal whale hunting in Ulsan and Pohang so far this year. That compares to eight last year and 12 in 2007.

Those who are caught hunting whales in Korea are required by law to pay 30 million won in fees or face three years or less in prison.

The Ministry for Food, Agriculture, Forestry and Fisheries contemplated legalizing whale hunting last year but was forced to step back when the Foreign Ministry forcefully opposed the idea, fearing an international backlash, especially with the upcoming G-20 Summit.