Warriors out for blood vs. Nigeria

Warriors out for blood vs. Nigeria 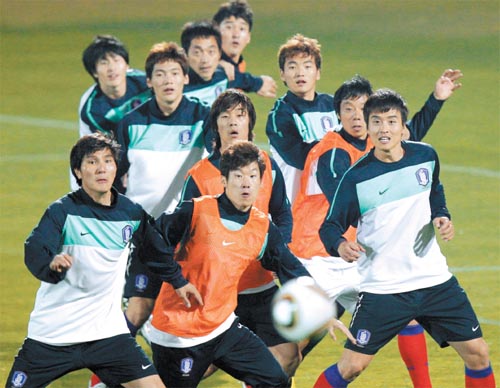 Get ready, Red Devils. Korea’s World Cup match against Nigeria promises to be fast and physical - and manager Huh Jung-moo says his Taegeuk Warriors will set the tone early.

“This is the type of opportunity that might come around once in a lifetime. We’re not going to play a defensive game,” Huh said yesterday.

“It’s important to get off to a strong start. We’re expecting our opponents to play a physical game, and we’re going to do all the things we prepared for in training.”

This game is the clutch. After a clean, 2-0 win against Greece, Korea went down a killing 1-4 against Argentina. A win would place Korea in strong position to advance to the knockout rounds, but the team can still advance into the knockout stage with a tie if Greece ties or loses to still-unbeaten La Albiceleste.

The two teams with the highest scores in the group rounds will advance to the Group of 16. A win scores a team three points; both teams score one in case of a tie; no points are awarded for a loss. If both Korea and Greece lose their next matches they could end up with identical scores - three points each. In that case, the advancing team will be determined first by the smallest goal differential, followed by the largest number of goals scored in all matches, then goals scored in their match against each other.

But Korea doesn’t want to play the numbers game. Huh sounds confident of a win against the Super Eagles, who so far haven’t won one game but boast their share of talent.

The manager is preparing his team for tomorrow’s 3:30 a.m. kickoff (Korea time) with a 4-1-4-1 formation featuring Park Chu-young as the single forward and Kim Jung-woo as lone defensive midfielder. At a scrimmage yesterday, Huh went with a 4-4-2 formation in the first half, with Park Chu-young and Yeom Ki-hun in forward, and the 4-1-4-1 in the second.

Kim Jung-woo is charged with giving Korea its first line of defense, freeing up midfielders Park Ji-sung, Yeom Ki-hun, Ki Sung-yueng and Lee Chung-yong to attack on offense. The 4-1-4-1 formation also allows the midfielders to contain the opposing attack in the midfield.

“Our opponents have some excellent players. We can limit their movement if our midfielders press and pressure them,” said Huh.

Nigeria’s defensive line, led by Joseph Yobo and Danny Shittu, had trouble responding to pressure from both the Argentine and Greek offenses. Korea’s strategy is to come out aggressive and cut down on the passing lanes.

Huh has ordered Park Chu-young, Park Ji-sung and Lee Chung-yong to attack effectively in counterattack situations, and told his players to try to gain possession of the ball in the center field area and look for fast routes into the Nigerian four-man defensive line, which has shown weakness in man-to-man situations.

As effective as the 4-1-4-1 formation sounds, it has its shortcomings. With only one defensive midfielder in front of a four-man defense, Korea will have limited chances to create an attack from its back line, and could have to risk long pass attempts.

The formation also leaves the defense exposed. This leaves Kim Jung-woo with a big responsibility in the game.