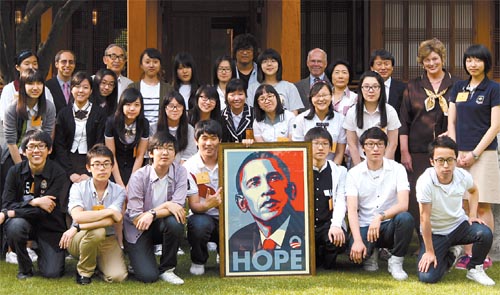 Students who participated in a poetry contest last Monday hosted by the U.S. embassy in Korea pose with judges and U.S. Ambassador to Korea Kathleen Stephens (second from right in back row) in front of the ambassador’s official residence in Seoul. The competitors - selected from foreign language and international high schools nationwide - were required to write sijo, a traditional Korean poetic form that has three lines and a narrative twist at the end. By Kim Seong-ryong


Sitting on bamboo mats with traditional music playing in the background and a light rain drizzling outside, 22 high school students squared off against each other last week to bring back the spirit of poets from centuries ago via a competition involving sijo, a type of Korean poetry.

It’s a common scene across the country, as such events are widespread in Korea.

But - like the poetic style it focused on - this particular competition had a twist: The students showed their literary creativity by writing poems in English at the U.S. ambassador’s official residence in Seoul, which sits on a site that once featured a pond where Korean royalty gathered to recite poetry and indulge in drinks.

“I have been looking forward to this day for a long time,” Kathleen Stephens, the United States ambassador to Korea, said during an opening speech for the competition, where she also displayed an old personal booklet of poems written in 1975 by Korean poet Kim So-wol.

“You are to fill this house with creativity again.”

Students came from all over the country to compete in the contest, where they composed sijo revolving around the theme of “hope.”

The U.S. Embassy sent out a request for participants to 38 foreign language high schools and international schools in Korea a month ahead of the competition.

Twenty-two schools sent hopefuls to the poetry event, some of whom shirked other responsibilities to participate.

“I took the express bus and the subway to get here this morning,” said Lee Hyun-ju, who came from Chungju in North Chungcheong. “I’m a senior and right now it’s the middle of finals but I thought this would be a better experience.”

So why write ancient sijo in English?

One of the judges, David McCann, who is a professor in the department of East Asian languages and civilizations at Harvard, thinks sijo could make a comeback in Korea if it takes off in the U.S. and other English-speaking countries.

“[People in the U.S.] are used to Japanese haiku poems because many of them had ‘haiku writing days’ at school,” McCann said. “Although I think sijo are better, haikus can be the connection to help people understand sijo.”

McCann’s fascination with Korea started in 1966 when he joined the Peace Corps after graduating from Amherst College.

He spent the next three years working with the organization here.

His interest in the country continues to this day, which trickles down to his students in the United States.
McCann now teaches a workshop with 12 to 15 students at Harvard that involves writing sijo.

He also has a book of English sijo published, titled “Urban Temple: Sijo, Twisted and Straight.”

McCann wrote his first sijo piece on a napkin three years ago as he sat in a restaurant in Harvard Square.

“It was about lobsters,” he told students at the competition before reciting the poem in English and Korean.

Ko Un - a renowned contemporary Korean poet who won the Korean literature prize in 1974 and 1987 as well as Canada’s Griffin Poetry Prize Lifetime Achievement Award in 2008 - was also present at the event as a judge.

“We need a fresher pair of eyes when it comes to poetry writing,” Ko said, highlighting the need for more sijo writers in general. “There isn’t an easy solution, but there’s no reason for [English sijo] not to work.

“As many people fall in love with Korean food after just one taste, the same might be said for sijo, and this could be the first step toward boosting its appeal both abroad and at home.”

Ko was later swarmed by students clamoring with their digital cameras and cell phones to take pictures with him.

The competition is just one of several literary exchange events planned between the U.S. and Korea, according to Kwon Young-min, a professor at Seoul National University who was also a judge at the recent sijo competition.

“We are planning to go back and forth between the two countries” to host various events and competitions, Kwon said.

After a strike of the gong marking the end of the sijo contest, the winners were announced.

“I never dreamed of being in first place,” said Kim, who recited her winning sijo, “The Moon”:

“I sigh as if the ground would sink yet today the moon glistens beyond my sorrow / I run, I hide and beg to get away but still a stream of light fills my empty heart / Tonight I rise without a single doubt I throw away my worries and embrace the moon.”

Kim said the poem she wrote reflects the difficulties everyone faces in life, “even if they are just high school students.”