Lee’s on tap for a shot at Cup glory

Lee’s on tap for a shot at Cup glory

DURBAN, South Africa - The old hands may get a chance to play when the Taeguk Warriors face off against Nigeria early tomorrow morning.

Nigeria fans are looking for 34-year-old veteran Nwankwo Kanu to step onto the pitch. For Korea, manager Huh Jung-moo is looking at 31-year-old forward Lee Dong-gook as the man who’ll be able to provide an offensive spark in the second half. Fully healed from a right-hamstring tear he suffered during the friendly against Ecuador on May 16, Lee’s long-range shots can come in handy against Nigeria’s four-man defensive line, which has been prone to poor man-to-man coverage.

The veteran may lack the ability to penetrate his opponent’s defense and create his own chances, but he has an accurate shot and it can come in handy against a squad that often leaves open spaces in its zone. Nigeria’s defensive line has so far tended to sit back rather than pressure its opposing forwards, leaving a gap between the midfielders and defenders. The open spaces could give Lee enough time to set himself up for a big shot.

For Lee, it’s a chance at making good on early promise. He made his World Cup debut in 1998, when he was substituted into the game against the Netherlands in the 76th minute, and immediately grabbed attention by getting off a shot. 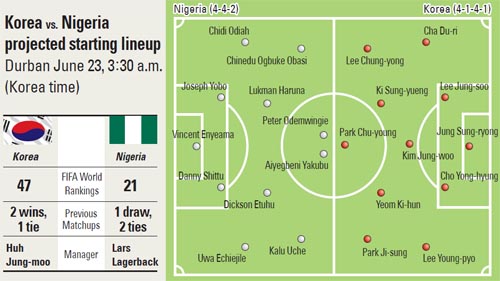 But after being tabbed as successor to Hwang Sung-hong as the next big forward on the national team, Lee’s star power dimmed fast. He was kept off the 2002 squad by Dutch manager Guus Hiddink, who wanted versatile players and thought Lee didn’t contribute enough to defense. Lee proved his worth by scoring five goals in eight matches during the regional qualifying rounds of the 2006 World Cup, but a knee injury two months before the games kept the talented forward from returning to the world’s largest sporting event.

After a failed stint with Middlesbrough in the English Premier League, Lee topped the K-League with 21 goals for the Jeonbuk Hyundai Motors last season. He has continued his impressive pace with five goals in nine league matches this season.