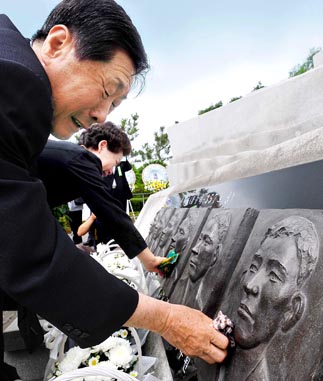 Bereaved relatives touch a relief of fallen Navy sailors on June 29, 2009, at the seventh anniversary of the Second Battle of Yeonpyeong. [JoongAng Ilbo]

The government is significantly expanding the size of the ceremony to mark the eighth anniversary of the Second Battle of Yeonpyeong in an effort to raise public awareness of national security.

The Ministry of Patriots and Veterans Affairs said yesterday that it has moved the ceremony to the War Memorial in Yongsan, Seoul, and expects about 2,500 guests, twice the number of previous years. In addition, the ceremony will be televised live on KBS, Korea’s largest broadcaster, rather than on the government-run cable station KTV.

A ministry official said that, “Public interest in national security issues is high,” since the Cheonan went down in the West Sea with 46 of its sailors on March 26. Seoul has blamed the disaster on a North Korean torpedo attack.

But while the government said increased awareness is necessary in the wake of the Cheonan, some progressive groups said the larger ceremony will only worsen relations between the Koreas.

You Young-jae, a senior activist of the Solidarity for Peace and Reunification of Korea, said the expansion is meant to win public support for the Lee Myung-bak administration’s hard-line stance against the North.

“Raising national security awareness could end up only boosting animosity against North Korea and that will worsen the inter-Korean relations,” You said.

Six South Korean Marines died in the June 29, 2002, battle with North Korea near the Yeonpyeong Island off the West Coast. North Korea lost 13 soldiers in the clash.

This year’s ceremony will be held in a recently opened room at the War Memorial, which has been named after the Chamsuri-357, the South Korean Navy vessel that went down in the skirmish. The War Memorial now includes a life-size replica of the ship.

The ministry said it has invited 3,700 military leaders and government dignitaries to this year’s ceremony.

President Lee is scheduled to visit Latin America on June 29, but Prime Minister Chung Un-chan, Defense Minister Kim Tae-young, and Navy Chief of Staff Kim Sung-chan will participate, it said. The U.S. Forces Korea is also scheduled to attend the event for the first time.

Under the administrations of Kim Dae-jung and Roh Moo-hyun, who supported a policy of engaging the North, the anniversary ceremonies of the Second Battle of Yeonpyeong were an internal event marked only by the Navy. The Lee administration upgraded it into a government event beginning 2008, although until last year the venue remained at the Second Fleet in Pyeongtaek, Gyeonggi, the Navy’s base in the West Coast.

Friday is the 60th anniversary of the beginning of the Korean War.