All we are saying is give Yoko a chance

All we are saying is give Yoko a chance 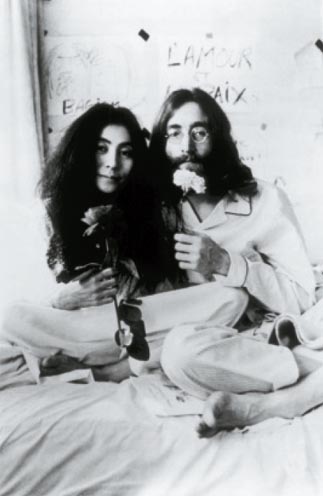 Yoko Ono and John Lennon are famous for their joint performances such as the “Bed-In,” pictured above. Provided by theater i-Gong

Almost everyone in the world knows who Yoko Ono is. Famous for being the wife of legendary Beatle John Lennon, she is also a multifaceted artist in her own right. The Japanese artist’s field of activity is diverse, ranging from performance art to film and music. And now, an event featuring Ono’s works is currently being held in Seoul.

“We have come up with this event to commemorate the fourth anniversary of the opening of our theater this year, considering that Yoko Ono, who is an independent female artist and a producer of alternative cinema, is the right person to represent us,” said Lee Seung-won, a PR official at the media theater i-Gong. The theater is known for focusing on alternative cinema, media for minority groups and discovering and distributing such films. It is also the organizer of the Seoul International New Media Festival, which is now in its 10th year.

“A retrospective of Yoko Ono like this is the first of its kind held in the country and you will be given a rare chance to review a considerable number of her films at one place,” Lee added.

A total of 11 films by Ono, grouped under five different themes, are on the program. Under the theme of “Yoko Ono Tag: Lover, John Lennon” are “Imagine” (1971) and “Two Virgins” (1972). The Paul McGrath-directed in-depth documentary “John & Yoko Give Peace a Song” (2006) and a 1975 episode of “The Dick Cavett Show” featuring the couple will be released for the first time in Korea.

Aside from the films, which show Ono from different angles, the artist’s musicianship will be displayed at the media exhibit titled, “Yoko Ono Tag: Musician,” also being held at the theater.

In addition, two special events are now under way.

Tomorrow, from 6 to 9 p.m., a workshop dedicated to Ono will be hosted by Kim Hyun-ju, a local performance media artist. During the event, the visitors will have an opportunity to receive coaching from Kim in performance art exercises in the vein of Ono’s work.

The “Multi Artist Party,” which will be held this Friday from 5:30 to 10 p.m., is a multimedia tribute to Ono featuring three Korean female indie artists - Siwa, a singer-songwriter; Beetle Juice, a “soft psychedelic” duo; and Red Girl, a feminist playwright-cum-actress.

“In my performance, I will act just as Yoko Ono did so that I can convey her courage and spirit directly to the audience and also pay homage to her,” the actress was quoted as saying by the theater.

Tickets can be purchased either by contacting the organizer at igong337@hanmail.net or at the door. Go to Hongik University Station, line No. 2, exit 4. For more information, call (02) 337-2870 or visit www.igong.org.