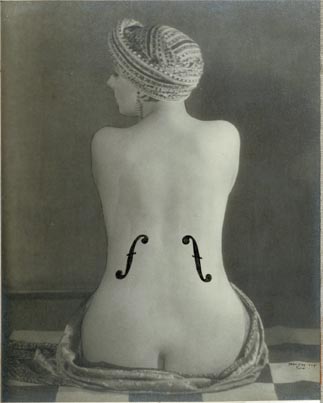 “I paint what cannot be photographed, that which comes from the imagination or from dreams, or from an unconscious drive,” he said in an undated interview that was later reprinted in “Man Ray: Photographer,” in 1981 after his death.

In numerous instances, the artist referred to himself foremost as a painter and even declared that “photography is not art,” in 1937 through the title of a photo-essay book.

Although he started out as a painter, Man Ray is best known for whimsical photographs that reflect his thoughts on chance, dreams and the unconscious, and his pioneering photographic techniques.

“As one of the first experimental, abstract photographers, Man Ray’s influence on contemporary commercial and art photography is beyond that of his peers,” said Lee Sou-kyoun, the director of the curatorial bureau at the Seoul Museum of Art who organized the exhibition. 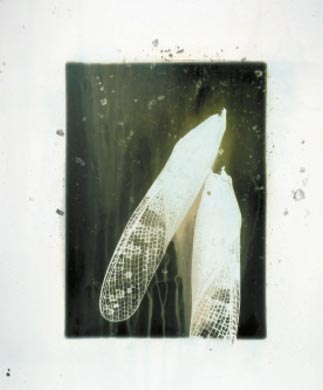 The museum’s exhibition, “Man Ray’s Photography and His Heritage,” which runs until Aug. 15, includes works by the artist as well as works by contemporary Korean and overseas photographers who followed him.

With 63 Man Ray photographs, around half of which are original vintage prints, the exhibition provides the public with a summary of the artist’s photographic career. However, in many instances, the connection between Man Ray’s works and those of the 47 other artists in the exhibit feels quite loose.

The exhibition is organized into three sections: “record of reality,” “world of creativity” and “world of fiction and imagination.” The record of reality section shows Man Ray’s portraits and commercial and documentary photographs, including a self-portrait called “Autoportrait solarise” (1932), as well as photographs he took for fashion magazines, including a Cartier jewelry ad that appeared in Harper’s Bazaar.

Lee explained that even though Man Ray did numerous commercial photos for fashion magazines including Vogue and Vanity Fair during his early years as a photographer, it was his portraits, many of which are displayed here, that started to bring him recognition in the art world.

In the same section, “Cosmetic Anxiety,” by Oh Hein-kuhn (2010), which consists of photos of adolescent girls wearing “excessive” makeup, is featured among the works by other photographers. Although there is a relationship between the two photographers’ works, the themes and motives for their work and the techniques they use are noticeably different.

“Man Ray was one of the first artists to take photography on a different route from realism, as a record of everyday life. He stretches its boundaries to include elements of painting, fashion and eventually, art,” said Lee. “In this sense, Man Ray had a direct influence on all photographers who came after him, in that he elevated photography into the realm of art and opened the doors for experimentation.” 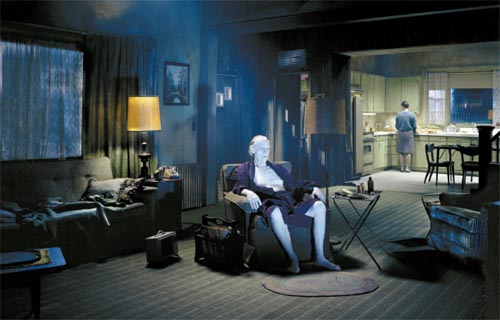 “The Father” (2007) by Gregory Crewdson Provided by the museum

The world of creativity section features one of Man Ray’s most widely known photographs, “Le Violon D’Ingres” (1920-1921), in which a woman’s torso is portrayed as the body of a violin. The museum explains that this second section includes experimental works by the artist which contrasts with his realist photography.

“With Le Violon D’Ingres, Man Ray made his first, distinct stamp as a photographer in Europe, after moving to Paris in 1921. Although he was American, Man Ray’s career unfolded mainly in Europe, after he moved to Paris to follow Marcel Duchamp, who he met in 1915 in New York. In Paris, he was soon influenced by the Dada and Surrealist movements, although his works are often categorized just as avant-garde photography.

The world of fiction and imagination section shows Man Ray’s departure from his post-impressionist works and his movement toward the abstract. Man Ray’s avant-garde leanings are delivered through techniques such as retouching, frame decomposition, shaking and the artist’s celebrated photogram technique, which he named “rayograph” after himself.

The photogram technique creates photographic images without the use of a camera. Objects are placed directly onto photo-sensitive paper to give the appearance of a photograph.

The photogram technique can also be seen in Koo Bohn-chang’s “Lost Paradise” series, which is also exhibited in this section. Koo, one of Korea’s most recognized photographers, placed objects like butterfly wings and insects on his “Lost Paradise” photographs to create beige and black “photo-like” images.