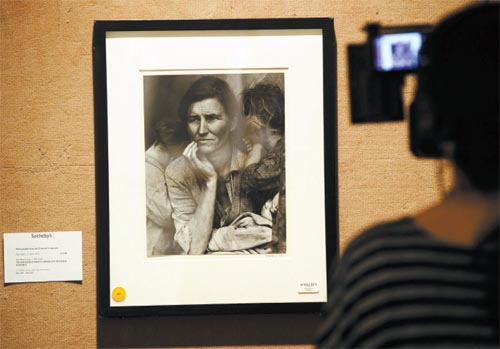 “Migrant Mother” (California, 1936) by Dorothea Lange is one of the many photographs included in Monday and Tuesday’s Polaroid collection sale at Sotheby’s. [AFP, YONHAP]

NEW YORK - More than 1,000 photographs from the historic Polaroid collection, including works by Andy Warhol, Ansel Adams and Chuck Close’s gigantic “9-Part Self Portrait,” went under the hammer this week at Sotheby’s.

The auction was ordered by a bankruptcy court in northern Minnesota and proceeds from the sale will go to creditors of the failed company. Polaroid has filed for bankruptcy twice, in 2002 and 2009.

The auction was held Monday and Tuesday, following a weeklong exhibition of what are considered the best photographs in the collection - the complete collection numbers about 16,000 pictures - at Sotheby’s Manhattan offices.

Ranging from classic Polaroid snapshots to rare gelatin silver prints, the collection was amassed over the years by Polaroid company founder and inventor Edwin Land and his technical director and photographer Ansel Adams, 400 of whose snapshots are included.

Land sought to build his collection and allowed Adams to buy at the company’s expense classic examples of photo greats like Harry Callahan and Dorothea Lange, whose famous “Migrant Mother” (California, 1936) is estimated at $60,000 to $80,000.

Some of Adam’s mural-size photographs are among the collection up for auction, including “Clearing Winter Storm, Yosemite National Park.” The photograph sold for more than $722,000 on Monday, setting a new auction record for Adams.

The auction was estimated by Sotheby’s to bring in $7.2 million to $11.1 million.

“In the ’50-’60s, Ansel Adams started sending out cameras to artists for feedback. The artists would exchange their prints for the use of Polaroid cameras. In the late ’60s, this unique situation was called ‘the Artist support program,’” said Bethel.

A favorite of families and tourists, the Polaroid camera also had a following among legendary photographers and painters like Robert Mapplethorpe, Robert Frank, Andy Warhol and Robert Rauschenberg, some of whose snapshots will go under the hammer.

Other, lesser-known artists such as David Levinthal are also included and Sotheby’s hopes interest in the Polaroid collection will boost their worth.

Bethel said it was the first time for Sotheby’s to offer a collection centered around a technology rather than a particular theme or artist.

“Polaroid has had influence on the history of photography, aesthetics and contemporary art,” she said.

“Polaroid raised everyone’s expectations for instant result. It prepared the digital age, it was a psychological step to the digital world,” Bethel added.

Polaroid was bought up in 2009 by The Impossible Project group, which is trying to revive the market for the fabled instant camera and has named eccentric pop-singer Lady Gaga as its artistic director.