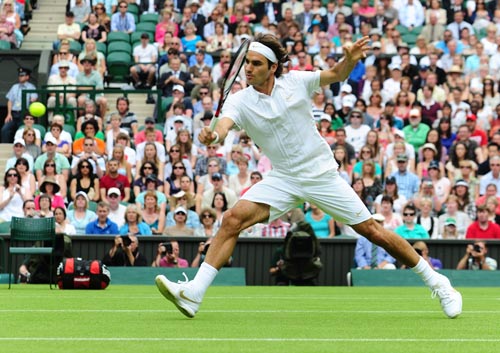 Switzerland’s Roger Federer returns a shot during his first-round match of men’s singles against Colombia’s Alejandro Falla in the 2010 Wimbledon Championships in London on June 21. Federer won 3-2. [XINHUA/YONHAP]


LONDON - Roger Federer said he felt his luck was finally in this season after he scraped into the second round as he bids to win a record-equaling seventh men’s Wimbledon title.

Federer made it through to a clash with Serbia’s Ilija Bozoljac - but only after being given a real fright by Colombia’s Alejandro Falla. The world No. 60 won the first two sets and served for the match in the fourth in what was shaping up to be one of the biggest shocks in Wimbledon history.

But top seed Federer, who has not won a tournament since claiming the Australian Open title in January, said maybe Lady Luck was smiling on him at last this season.

“It came as a bit of a shock and it’s not something I was that prepared for, but you have to draw from experience and physical strength. I live to fight another day,” the world No. 2 said.

“I’ve lost many matches this season I should have won and today I won a match I should have lost. I think I’ve been unlucky enough already this season, so I needed one lucky match. We’ll see how important it is, depending on the run I go on now.

“I’ve lost a few matches this season with match points, 7-5 or 7-6 in the third. This is definitely some kind of a match I kind of needed. You can’t win them all when they’re that close, because they’re being played on a couple of points here or there.

“One thing for sure you can do is push the luck on your side. That’s not something I have been doing maybe enough the last few months. I’m happy I gave myself a chance. Maybe some think I should have never put myself in that position.”

In a key game at 4-4 in the third set, the Colombian had three break points, but Federer pulled it back to deuce and served an ace for a 5-4 lead. Federer had a break for set point when Falla hit a shot long, but the Colombian took it to deuce.

Federer had the advantage when Falla hit the net, and won the set with a cross-court forehand winner to start his comeback. In the fourth set, Federer had a break point at 4-3 down but wasted it. The Swiss held serve to leave the Colombian serving for the match at 5-4 up.

“He played really well and I struggled early on, but came through, which is most important,” Federer said.

“You definitely feel uncomfortable because if you’re used to being down the whole time your whole life, it’s something that’s kind of normal.

“For me it’s not normal to be down two sets to love, especially at Wimbledon, and early on in Grand Slams. It’s something I’m not quite used to.”

“That’s why you’re happy sometimes you get over the finish line and have a chance to play much better maybe or play a different kind of a player. That’s what I’m going to get for sure in the next round.”

Falla could only rue his missed opportunity. “I had a big chance serving for the match. He told me that I played amazing after the match,” said the 26-year-old.

“I knew if I couldn’t take the chances, he was going to come back and try to win the match. And he did it.”