North goes down hard to Portugal, 7-0

North goes down hard to Portugal, 7-0 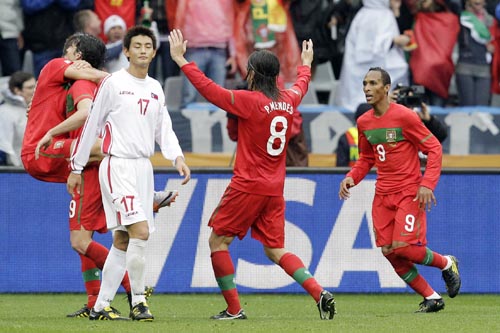 Portugal’s Tiago, second from left in the background, is celebrated by his teammates after scoring as North Korea’s An Yong-hak, third left, walks past during the World Cup Group G soccer match between Portugal and North Korea in Cape Town, South Africa, on June 21. Portugal won 7-0, Tiago scored the fourth goal. [AP/YONHAP]

Chile kept up Latin America’s fantastic run at the tournament, squeezing one goal past Switzerland’s stingy defense, while off the field a rebellion in the French camp remained the tournament’s main talking point.

Little-known North Korea were back at a World Cup for the first time since they stunned the world in England 44 years ago. But there was no repeat of 1966’s fairy-tale run, in which they took a three-goal lead against Portugal in the quarterfinals before Eusebio scored four to inspire a 5-3 comeback for the Europeans in one of the all-time great games.

Portugal’s modern generation made an easier job of it. Watched by Eusebio in Cape Town, they pierced the Koreans’ much-vaunted defense with ease time and time again. Man of the match Cristiano Ronaldo notched the sixth goal, his first for Portugal in a competitive match in two years, in a rout that left North Korea on zero points after two games and unable to qualify for the second round despite having a match left.

Portugual’s beaming coach Carlos Queiroz praised his team for “the wonderful way in which they played, their great attitude, reverence for the game, the beautiful football, the beautiful goals.”

Despite having Valon Behrami sent off, Switzerland still managed to break Italy’s World Cup record of 550 minutes without conceding a goal in Monday’s second game. But their defense was breached in the second half during a wave of fluent Chilean attacks. A header by the South Americans’ second-half substitute Mark Gonzalez with 15 minutes to go won the game 1-0 and kept Chile on top of Group H with six points.

President Sebastian Pinera, an ardent soccer fan, watched the match from the ravaged city of Constitucion with survivors of a massive Feb. 27 earthquake.

“The World Cup is for everyone and we wanted to share,” he said from the quake zone.

France’s World Cup squad was in danger of imploding over the expulsion of striker Nicolas Anelka for insulting his coach. President Nicolas Sarkozy sent his sports minister to visit Les Bleus’ tense camp in Knysna after a pro-Anelka players’ protest halted training on Sunday, sparked the resignation of a senior team official and brought a torrent of scorn at home.

“The mutiny at Knysna will forever remain the Waterloo of French soccer,” said Le Parisien paper, referring to Napoleon’s 1815 defeat. “This band of spoilt children ... has no limit.”

Sponsors have begun distancing themselves from the team. Bank Credit Agricole said it had canceled a TV campaign with the team and fast-food chain Quick has stopped using an advertising film featuring Anelka.

As well as France, Italy and England are also licking their wounds after a fairly shocking World Cup so far for Europe’s traditional powers. English vice-captain Frank Lampard denied reports the team had confronted coach Fabio Capello in crisis talks, but clearly all is not well after two dire performances brought two draws for the nation that invented football.

“We play in the best league in the world, the Premier League, and we have to play with that pace and passion that we have every week at home,” he said.

Honduras have three brothers in a World Cup squad for the first time. The presence of Jerry, Wilson and Jhony Palacios has an emotional edge because the body of their kidnapped fourth brother, Edwin, was discovered a little over a year ago.