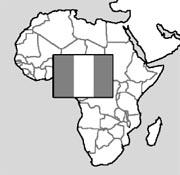 “I am Mrs. Mariam Abacha, the widow of Gen. Sani Abacha, the late Nigerian head of state. If you help me transfer the sum of $50 million, which is frozen in a Swiss bank account, I agree to offer you 30 percent of the total.” This is a typical “Nigerian e-mail scam.” As many gullible people were hoping for a windfall, the number of scam victims has grown from country to country. Because it was also true that former President of Nigeria Sani Abacha smuggled an enormous amount of the nation’s wealth out of the country, people believed the scam was true.

While Abacha was in power, high-ranking government officials, military officers and police officers accumulated massive amounts of wealth illegally. As a result, about 80 percent of the population was driven into poverty.

At that time, the people’s only consolation was football. Watching the Super Eagles, they forgot about their impoverished lives. Abacha, who understood this reality, spared no effort to support the Nigerian national football team. It was no coincidence that during his term in office, the Super Eagles advanced to the 1994 World Cup finals for the first time ever and won a gold medal at the 1996 Summer Olympics.

The news of Abacha’s sudden death arrived only five days before the team’s first match in the 1998 World Cup finals. Wearing black armbands to express their sorrow for the loss of the nation’s leader, the Nigerian players staged a big upset by defeating Spain’s “Invincible Armada” 3 to 2. It is said that even the democratization rallies that had plunged the country into turmoil at the time were mitigated somewhat by cheering for the national team.

Sunday Oliseh, a former Nigerian footballer and coach who scored the winning goal in the match against Spain in the 1998 World Cup finals, said, “I wanted to win the game for the people. They deserve to enjoy the victory.”

At the beginning of this year, we saw just how high football ranks in the minds of the Nigerian people.

The president at the time, Umaru Musa Yar’Adua, was not seen in public for eight weeks, but because the public’s attention was focused on the 2010 African Cup of Nations, held in Angola in January, few people noticed.

After a while, Yar’Adua resurfaced amid reports that he had been treated for pericarditis to give an interview with the BBC. He closed the interview by saying that he hoped the Super Eagles would win the Cup.

At press time, Korea’s Taegeuk Warriors were preparing for their pivotal World Cup match against the Super Eagles.

Like the Nigerian team, the Korean team also has the extraordinary support of its people.

Koreans have stood in the rain and fought through crowds just to show their support for their team.

We hope that we, as the “12th player” on the national team, will find our way to victory.