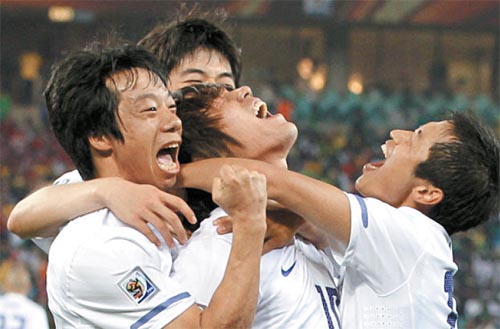 Park Chu-young, center, celebrates with his teammates after scoring the go-ahead goal off a free kick in the 49th minute of the match against Nigeria. [YONHAP]

The Taegeuk Warriors stood toe-to-toe with the Super Eagles early yesterday morning, as they battled to a thrilling 2-2 draw - and their first spot in a World Cup Round of 16 fought on foreign soil.

The tie at the Moses Mabhida Stadium was enough to bring Korea to second place in Group B - after unbeaten Argentina - and a daunting face-off against Uruguay at 11 p.m. (Korea time) on June 26.

“I’m happy that we reached our goal. I’m proud of our players,” said elated manager Huh Jung-moo, who earned the distinction of being the first Korean manager to lead the national team to the knockout rounds. “It’s harder to advance out of the group stage.”

“We had to overcome heavy pressure during the three group stage games. That made us stronger,” said captain Park Ji-sung. “Our players were able to enjoy and play up to their capabilities. That’s a positive sign.”

In their next match, Korea is up against a tough South American opponent. Ranked 16th in the world, Uruguay was able to cruise to a first place finish in Group A with two wins and a draw and without allowing a single goal in the process.

Korea has tied one and lost four of its previous five matches against the team, including a heartbreaking 1-0 loss at the 1990 Italy World Cup.

“Uruguay is a team that utilizes many defenders and counterattacks well. It won’t be easy to score against them,” said Huh. “I would say our chances of winning are now 50-50. It all depends on the pace of the game and who prepares better.”

Uruguay relies heavily on its strong defense and utilizes Diego Forlan and Luis Suarez to spearhead their counter attacks. Suarez is young, just 23, but he’s shown that he can penetrate the opposing defense and thread passes to his teammates. But the star of the team is veteran forward Forlan, who scored two goals in the group stage and is at peak form.

While Uruguay’s defense has been near-flawless so far, center defenders Diego Lugano and Mauricio Victorino struggled with low crosses from the sides in their final Group A win against Mexico.

Korea will have to fight to make the quarterfinals. And even while surging forward, the team showed room to improve.

In the match against Nigeria, right fullback Cha Du-ri was caught out of position and allowed Kalu Uche to score the opening goal in the 12th minute. Uche came close to adding another goal in the 36th minute when his shot hit the post.

Cha settled as the game wore on, but center defenders Cho Yong-hyung and Lee Jung-soo were caught out of position on several occasions, giving the Nigerian attackers numerous chances in the process.

But Korea did make the most of the opportunities that came their way, and there were plenty: The rough and undisciplined Nigerians committed 22 fouls compared to Korea’s 12.

Given the time for set-piece play, the Koreans scored off free kicks. Lee Jung-soo made his second goal of the tourney when he tapped in the equalizer off a free kick from Ki Sung-yueng in the 38th minute, and Park Chu-young put Korea ahead 2-1 when his free kick curled past Nigerian goalkeeper Vincent Enyeama in the 49th.

Korea looked set for a win before midfielder Kim Nam-il committed an errant foul of his own by tackling Chinedu Obasi in the penalty box. Ayegbeni Yakubu tied the game off a penalty shot in the 69th minute, but the Super Eagles couldn’t add another. They were sent packing without a single win.