For this Big Bang member, it’s not so lonely at the T.O.P

For this Big Bang member, it’s not so lonely at the T.O.P 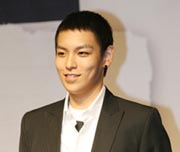 A boy band member gone solo is now making his way to the top.

Choi Seung-hyun, more widely known as T.O.P of the group Big Bang, has hit No. 1 on various music sites such as MNet, Bugs and Naver for his song, “Turn it Up.” T.O.P’s first official single was an instant hit with the release of his teaser clip on June 15, and his success continued with the release of the full song on June 21.

His good fortune does not stop there. The rapper’s film debut in “71: Into the Fire,” recorded 1.2 million viewers the first week of its release, making it the movie that snatched up a million viewers in the shortest time this year.

According to YG Entertainment, T.O.P’s management company, the rapper will not be performing his new single solo on stage but will be joining the other four when the official album for Big Bang comes out later this year.