A Korean reporter recounts his turn on the battlefield

A Korean reporter recounts his turn on the battlefield 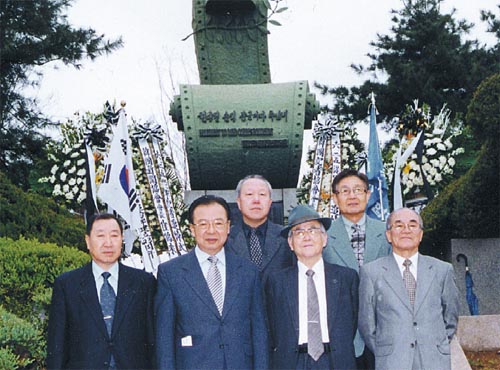 Han Young-sup, second from the left, poses with a group of fellow reporters in front of a monument in Daejeon commemorating journalists who died in the Korean War. Provided by Han Young-sup


At the moment Associated Press photographer Max Desfor was taking a picture of refugees scrambling to board a vessel in Hungnam, on the North Korean side, Han Young-sup, a war correspondent with the Korean Central Broadcasting Center (now the Korean Broadcasting System), was in the same place. These two journalists were reporting on the same war at the same time, but from very different perspectives.

Han described the moment with tears in his eyes.

“There was an endless line of people asking for help. They were running away from the North Korean army and asking us to save them.”

In December 1950, a vessel docked in Hungnam was preparing to transfer military goods and personnel to the southern part of the Korean Peninsula.

The general, Han said, was deeply touched and tried to take on as many refugees as possible, but there was still not enough space for everyone. Han described how, as the refugees clambered to get on the vessel, many of them fell into the freezing ocean or were caught in the gates.

“Refugees were striving to get on board,” Han recalled. “Some of them were killed when they were stuck in the vessel’s steel gate as it was closing. I can still hear them screaming for their lives.”

Han became a war reporter while covering the Ministry of National Defense for the KCBC. In 1948, he was one of 23 reporters chosen to receive two weeks of training in order to better understand the military. The reporters learned basic combat strategies and tactics on a working military base. They even learned how to handle a gun in case they found themselves in the middle of combat.

Within two years, the training had come in handy. The Korean War had begun, and Han was a correspondent on the front line. Back then, foreign news services such as the Associated Press and UP (now called UPI) were the main sources of news about the war. The KCBC was only able to do radio reporting because it lacked the resources to do otherwise.

“It cost more than fifty bags of rice to buy a single film camera, so the photos that Korean newspapers used were mostly from the foreign press as well,” said Han. “The best we could do was gather the up-to-date releases we got from the military correspondents and translate them into Korean so that Korean citizens could follow what was going on with the war.”

Fully-armed reporters moved regularly with the Army to places near the front line. Han was one of them.

The unit he was with had to go through a gorge where South Korean soldiers were trapped by North Korean and Chinese forces. With bullets flying overhead, many of his colleagues were falling to the ground. Han said he then felt something hot and fierce on his back. Thinking he had been hit, he didn’t want to touch his back to see blood all over his hand. But when he finally reached back and brought his hand to his eyes it was clean. He turned around to see that the sergeant who had been his guide had been shot dead.

“Without a second thought, I automatically picked up the magazine rifle he had and started shooting. All I could think about was sweeping the enemy,” said Han. “During the Japanese colonial period [1910-1945], I was a middle school student. The pain of not being able to speak my language and my name, of not having freedom, was hard to handle. I just couldn’t bear to see our people suffer again,” Han said, looking aggravated.

He still remembers every detail of the war, chronologically and geographically, without looking at his notes. Han wasn’t just reporting on the conflict. He was trying to save his country and his people by letting the world know about the war.