The endangered future of whaling

The endangered future of whaling 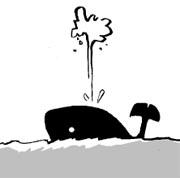 The history of whaling in the waters around the Korean Peninsula dates back to the prehistoric era, but today it is a highly controversial international issue.

The Bangudae Petroglyphs discovered along the Taehwa River in Ulsan have provided us with historical evidence of such practices. Designated as National Treasure No. 285, the 296 rock engravings are thought to have been carved in the late New Stone Age or early Bronze Age. Fifty-eight of the carvings depict various whales, including the gray whale, and whaling scenes.

A millennia after the Bangudae Petroglyphs were carved, Russian fishermen established Korea’s first modern whaling base at Jangsaengpo Port in Ulsan in 1899. Whales were so plentiful in the East Sea off Ulsan then that one foreign whaler wrote, “Whales even dared to run against our ship or sometimes we sailed on the backs of the whales.”

During the Japanese occupation (1910-1945), however, Koreans were prohibited from whaling. While the Japanese hunted without restriction, it wasn’t until April 16, 1946 - after the occupation ended - that a Korean went whaling again.

In those days, whale meat was not seen as a luxury but rather an alternative source of protein for those who could not afford red meat.

Today, however, whale meat ranks high on the list of gourmet foods and is treated as a precious commodity by epicures.

Japan has developed a large assortment of whale recipes over the years, with over 60 different ways to cook the meat. My Japanese friends tell me that boiled whale gums taste like abalone if dipped in vinegar sauce, and thinly sliced whale’s fin tastes chewy and delicious.

The number of whale meat eaters is on the rise in Korea, too, as new dishes such as whale meat burgers, pizza and even whale meat curry have been introduced.

Despite this, whaling remains illegal. The International Whaling Commission adopted a moratorium on commercial whaling for the conservation of whale stocks, and since only whales accidentally caught in fishing nets could be sold, the supply of whale meat has not been able to meet rising demand. Korean police have also been cracking down on illegal whaling and smuggling from abroad for more than two decades.

Defenders of whaling say that the moratorium on commercial whaling has created an overabundance of whales that are now interfering with legal fishing, as whales eat too much of the sea life that the fishermen are trying to catch.

The 62nd meeting of the International Whaling Commission takes place in Morocco this week, where a compromise deal between whale-hunting countries like Japan and opponents has been put forward, but it seems in danger of failing. Let’s hope that the global community will be able to find some common ground on this important issue.