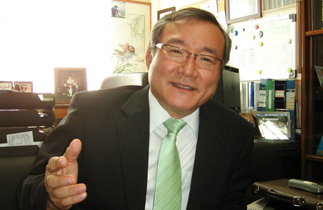 Korea won a bid to build a nuclear power plant in the United Arab Emirates at the end of last year with great fanfare. President Lee Myung-bak himself flew to the Middle East and closed the deal. Korea received praise for exporting nuclear power plants for the first time only 50 years after the country began importing nuclear technology from the United States. But the deal also provoked criticism that the Korean consortium had to rely on U.S.-based Westinghouse for some core technologies.

However, Park Goon-cherl, 58, president of the Korean Nuclear Society and professor of nuclear engineering at Seoul National University, said using foreign technology is nothing to be ashamed of since building a nuclear plant is an international project. Park said many Korean exports contain foreign components and nuclear plants are no exception. Park is chief adviser of the Nu-Tech 2012 project, a government initiative to develop nuclear technology to increase Korea’s self-sufficiency in nuclear engineering to nearly 100 percent.

Park stressed that it is important to collaborate with foreign partners and that this would eventually help increase nuclear plant exports.


Q. Korea recently succeeded in winning bids to build a nuclear plant in the U.A.E. and a research reactor in Jordan. How has Korea been able to build and export nuclear plants so soon after it imported nuclear technology from the United States?

The Korean Nuclear Society is involved in many international partnerships. Is this helpful in helping to export nuclear plants?

So far, the United Arab Emirates and Jordan have no nuclear academic society yet, but we’ve tried to sign memorandums of understanding with Southeast Asian nations, including Indonesia, Malaysia, Vietnam and Thailand, for cooperation. After Korea won the bid in the U.A.E., we began to try to expand our reach to the Middle East and Africa. We will create nuclear societies in countries that don’t have one. Firstly, we are going to sign an MOU with Jordan and Tunisia. We are making every effort to build connections on a civilian level.

The nuclear business is conducted like this: We let them learn about our technology and build connections. Academic activities play an important role in building relationships.

It is said Korea is 95 percent self-sufficient in nuclear technology. Can it be 100 percent?

For nuclear plants to be built in the U.A.E., we will need assistance from companies like Westinghouse for nuclear design code, reactor coolant pumps (RCP) and man-machine interface systems (MMIS). However, Doosan Heavy Industries & Construction has nearly completed the development of MMIS and RCP. For nuclear plants to be built in Uljin County, North Gyeongsang, MMIS and RCP developed by Doosan will be used.

We still need to develop nuclear design code software. That’s what the Nu-Tech 2012 project is for. But the fact that we haven’t developed it yet is not a big problem. It is a global age. It’s meaningless to talk about how much Korean technology is contained in a Korean-made mobile phone.

If we don’t have the technology, we can buy it. If we were to develop everything on our own, nuclear plants would become more expensive due to the cost of development.

Some criticized the U.A.E. deal because Westinghouse got a large percentage of the deal. What do you think?

Our nuclear technology came from Westinghouse, which supplied it to Korea 50 years ago. Westinghouse’s 7 percent share of the deal is not a lot.

It would be better for Korea to collaborate with Westinghouse than compete with it. We need to show that Westinghouse can also make a profit from cooperating with Korea. That’s how we can enter the U.S. market.

The MMIS, RCP and nuclear design code is said to make up 5 percent or more of the entire construction cost. How much is it really?

About 7 percent. It is a wrong idea that our products have to be made up entirely of our own technology. Even Korean automakers use foreign components. We need foreign technology to increase our exports. We need the partnership with Westinghouse to compete with France’s Areva.

After Korea won the U.A.E. bid, countries like France began to regard Korea as a competitor. We can purchase RCP from the United States if it is economical. Building nuclear plants is an international business. Saying we have to do it with our own technology is only nationalism. Even if we have the technology, we still need to purchase it from other countries for the sake of partnerships.

The government intends to develop the nuclear design code by 2012. Is it a realistic goal?

The Nu-Tech 2012 project is pushing experts to develop the software, but we don’t have enough nuclear experts or specialists. We can’t solve this issue easily by importing researchers.

Why did Korea recently give up on the nuclear plant bid in Jordan?

Firstly, Jordan doesn’t have enough money. The country’s main industry is agriculture. Unlike the U.A.E., Jordan is poor. Their nuclear power plant will be built on a mountain, and water has to be pumped up to the mountain. It would not be economical. The entire project could go nowhere.

Turkey is poor, too, but is still better than Jordan - Korea intends to bid for the nuclear plant in Turkey. There will be good news from Turkey soon.

There is the opinion that government-led nuclear bids are less efficient compared to those from the private sector. What do you think?

It is true in a way. However, building a nuclear plant is such a huge project. For the U.A.E. deal, President Lee Myung-bak went and closed the deal. Building a nuclear plant is not only an economic matter but also a political one. The government-led bid for the U.A.E. deal worked this time but in the distant future, the private sector should lead it. For now, it is too big a project for companies to do. There are too many risks for domestic companies to do it alone. So, the government may as well lead it.

Some critics say there is not enough demand for nuclear plants in the world. Is that true?

Countries that gave up on nuclear energy are now trying to build nuclear plants again. There is no alternative. Patrick Moore, co-founder of Greenpeace, appears to support use of nuclear energy. According to the International Atomic Energy Agency, there will be 300 additional nuclear plants built by 2030 and 1,400 by 2040.

The United States said it will not build any new nuclear plants, but it has upgraded them and extended their life. This has the same effect.