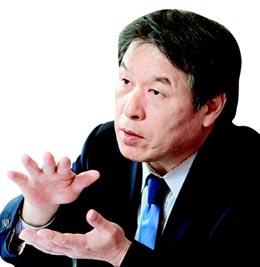 Ssangyong Engineering & Construction Co., Ltd. has created a landmark in Singapore that is likely to generate as much attention as the Statue of Liberty in New York, the Eiffel Tower in Paris and the Tower Bridge in London.

The Marina Bay Sands Hotel is a feat of design, engineering and innovation. It consists of three leaning towers, each of which looks like two cards tilting toward one another in an elegant inverted “V.” Sailing atop the three buildings at 200 meters is a sky park in the shape of a ship. The complex, one of Ssangyong’s most challenging projects to date, was completed in just two years.

The grand opening ceremony, held on June 23, was attended by a host of industry luminaries, including Kim S. Joon, chairman and CEO of Ssangyong Engineering & Construction Co., Ltd.; Sheldon Adelson, CEO of the Sands Group; and the CEO of Singapore Hong Leong Group. The media was also out in full force, with 1,200 reporters from around the world in attendance.

The three buildings, each of which is 55 stories high with three basement levels, has 2,561 hotel rooms. The eastern side of each building is slanted 52 degrees from the ground and connects to the western side at the 23rd story. From there, a single structure continues up to the 55th story. With its complex design and construction requirements, it is truly a marvel of modern architecture.

The Marina Bay Sands Hotel Provided by the company

To create the complex, Ssangyong E&C used a new installation method, becoming the first company in the world to use the method. The method, which is a post-tension and temporary bracing installation, allowed the company to make the legs of the inverted V tilt at an angle that is 10 times greater than that of the Leaning Tower of Pisa in Italy.

Floating above the towers, the Sky Park has three swimming pools, an observatory, a garden, restaurant and spa. At 343 meters long and 38 meters wide, the park is 20 meters longer than the height of the Eiffel Tower. Inside, the area is about twice that of a football field. The structure weighs more than 60,000 tons.

The observatory, the largest in the world, can accommodate up to 900 visitors at once. Its length is similar to that of a Boeing 747. Built as a cantilever structure, the observatory hovers 200 meters above the ground without any support.

In elevating the structure, the 7,000-ton steel frame, which was between 38 meters and 75 meters long and weighed between 200 tons and 700 tons, was hoisted above ground. The 60,000 tons of weight distributed to the lower part of the complex are balanced with a transfer truss method.

The construction methods Ssangyong E&C used to build the hotel complex were recently designated as a new construction technology by the Ministry of Land Transport and Maritime Affairs, the ministry’s first such designation for a technology used overseas. This will give Ssangyong E&C an edge when bidding for government construction projects. When the technology is used in similar projects the company will receive a fee (about 15 percent of the total construction cost).

According to Senior vice president An Kook-jin, “This is a project that even the most famous construction companies in the world worried it would only be possible in dreams. By completing the construction which was expected to take about 48 months due to the high level of difficulty involved, we completed the project in just 27 months, showing that our technology and construction methods are some of the most advanced in the world.”

The Marina Bay Sands Hotel is a project of the Singaporean government. Ssangyong E&C won the project in September 2007 with a bid of $686 million, making it the largest overseas construction project in Korean history.