A Taegeuk trio with a warlike mentality

A Taegeuk trio with a warlike mentality 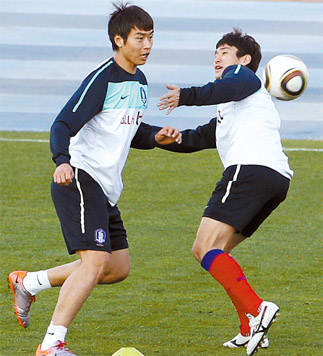 Lee Dong-gook attempts to get past Lee Jung-soo during a team practice at the Olympia Park Stadium in Rustenburg yesterday.

PORT ELIZABETH, South Africa - It’s not just brains and brawn that count when you’re competing in the world’s biggest sporting event, but attitude. Sometimes players need a nudge from their manager to get up to their full potential. But then there are those who don’t need any help getting motivated.

As the Korean national football team takes the stage tonight for their World Cup Round of 16 match against Uruguay, Lee Dong-gook, Oh Beom-seok and Kim Nam-il are all itching for some playing time - and a shot at redemption.

The 2010 World Cup is a special opportunity for veteran Lee Dong-gook. It’s the first time he’s returned to the big stage since he made his Cup debut in 1998, and so far, he’s been kept to a limited role. Lee made his only appearance in South Africa during the match against Argentina, when he was substituted in at the 81st minute, with the victory out of reach.

“I’ve waited 12 years, I can wait a bit more,” said Lee after a team training session yesterday. “I’m just waiting for a shot to play. I’m physically fit and ready.” 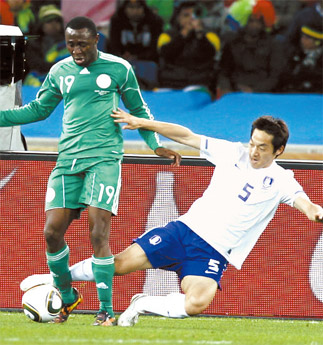 Kim Nam-il commits a foul on Chinedu Obasi of Nigeria on June 23. [YONHAP}

Lee showcased his scoring touch at the team practice yesterday. However, it’s still unclear whether he’ll receive any playing time against Uruguay. Manager Huh Jung-moo could decide to start Lee in an effort to penetrate the central area of the opposing defense - or, if the Korean offense is clicking, he might decide not to shake up the lineup with Park Chu-young and Yeom Ki-hun in forward.

When the followers are passionate and the stakes are high, a player can go from hero to scapegoat in a heartbeat. For right fullback Oh Beom-seok, the 2010 World Cup has been a nightmarish experience so far. Oh got the start in Korea’s second Group B match against Argentina, but couldn’t contain Angel Di Maria. After Korea was trounced 4-1, Oh drew hellfire from disgruntled Red Devils. 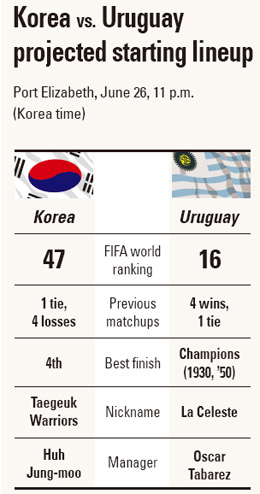 Angry fans suggested that Cha Du-ri could have performed better in the game - something they can’t be sure of. To make matters worse, some said Oh’s father’s close relations with Huh was a factor that helped determine that the right fullback made it onto the national team.

Having made his national team debut in January of 2005, the versatile and intelligent Oh was a regular on the national team during the regional qualifiers, appearing in 11 matches. Now he’s ready to prove to his critics that his sub-par performance against Argentina was not a fair representation of his true abilities. 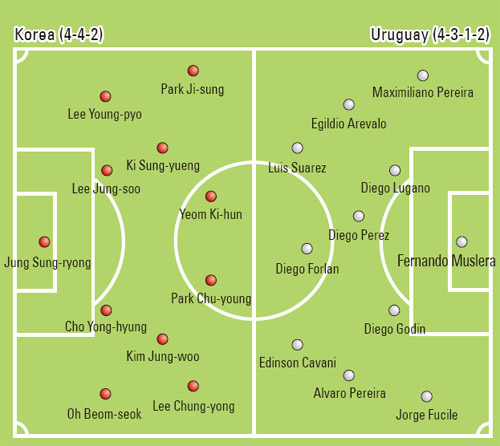 Veteran defensive midfielder Kim Nam-il is another player with something to prove. His errant foul on Chinedu Obasi during Korea’s third group match against Nigeria resulted in the game-tying penalty kick for the Super Eagles. Having played in 96 international matches for the national team including the past two World Cups, Kim knows very well that the only way to redeem himself is to play a strong game against Uruguay.

Huh told the press yesterday that he’s thinking of making one or two changes to the starting lineup tonight. But whether in a starting role or as substitutes in the second half, Lee, Oh and Kim are all raring to make a statement.