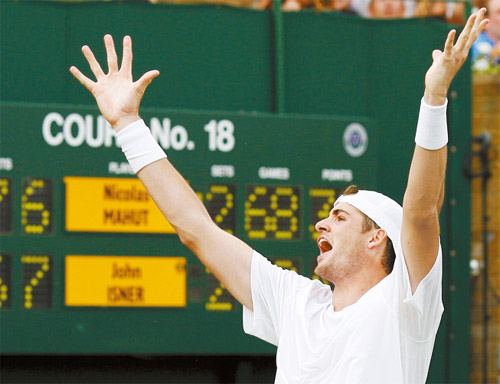 John Isner of the U.S. celebrates defeating France’s Nicolas Mahut at the 2010 Wimbledon tennis championships in London on June 24.[REUTERS/YONHAP]

LONDON - John Isner said Thursday he was left ravenous, delirious and sleepless by the longest tennis match ever played - and could not work out why it went on so, so long.

“I can’t explain that,” the American world No. 19 said after the incredible record-shattering contest at Wimbledon.

“I didn’t know what I was thinking out there, especially once the match got past 25-all. I wasn’t really thinking. I was just hitting a serve and trying to hit a forehand winner.”

The U.S. No. 2 said he apologized to Mahut after slowing things up further by taking a toilet break.

“I really had to go,” he said. “I didn’t want to disrupt the flow, but I couldn’t hold it anymore.”

Isner said he had no idea what was going on by the time the match was suspended due to bad light at 59-59 after seven hours on court Wednesday.

“I was completely delirious. I wanted to keep on playing, which I don’t know why, because he was the fresher one. Even though it was dark and no one could see, I wanted a final verdict, win or lose. I didn’t want to have to sleep on it. But it wasn’t to be.

“When I got in the locker room, sat down, I just didn’t know what to think.”

He said his compatriot Andy Roddick turned up in the locker room with armfuls of pizza, chicken and mashed potatoes to get some carbohydrates back into him.

“I was so tired out there. Couldn’t focus. Didn’t know what I was going through.”

Isner said he polished off three bananas, 12 energy bars, and 30 or 40 bottles of water during the epic encounter. However, he said it was the will to win that got him through.

“Not that I out-willed him. He gave it his all. I was just a little bit more fortunate than he was.”

He accepted that he was now a part of sporting history.

“It’s something Nic and I will share forever, really. I don’t think I’ve ever said five words to the guy prior to our match,” he said. “Now when I do see him in the locker room at other tournaments, we’ll always be able to share that.”

However, the 25-year-old said he hoped it was not the last word on his career.

“This one’s obviously going to stick with me probably the rest of my life, really. But I hope it doesn’t define my career. I think I have what it takes to do some really big things in this game,” he said. “So hopefully this won’t be the thing that I’m most remembered about.”AFP