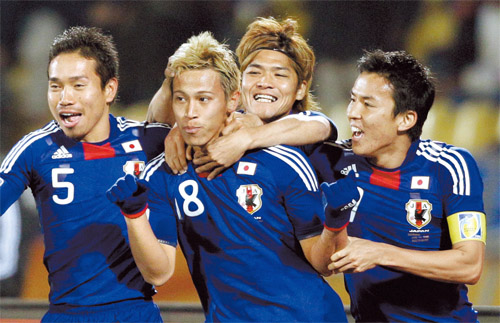 RUSTENBURG, South Africa - Japan star Keisuke Honda has backed his side to make an even bigger impression on this World Cup after a landmark victory over Denmark yesterday sent the Blue Samurai into the last 16 for the first time on foreign soil.

Honda picked up the man of the match award after scoring a stunning first-half free-kick, then brilliantly creating his side’s final goal for substitute Shinji Okazaki in a convincing 3-1 win.

Yasuhito Endo was also on target with a superb free-kick with the Danes’ goal from skipper Jon Dahl Tomasson at a stage when their hopes of the win they needed to qualify had all but disappeared.

“I know this is a really big win for Japan,” Honda said after helping his side line up a second-round meeting with Paraguay in Pretoria on Tuesday. “I expected to be really jubilant but I’m not as jubilant as I thought I would be because I don’t think we are finished here. I believe we can go further in this competition.”

Victory over Paraguay would make this Japan’s most successful World Cup, surpassing the achievement of the 2002 squad that reached the second round on home soil.

Honda insisted that confidence was growing in the squad.

“The team as a whole is becoming a team that can continue in the tournament,” he said.

The CSKA Moscow star also hailed the victory as a vindication of manager Takeshi Okada’s decision to adopt an attacking approach to a match in which Japan only needed a draw.

“It all comes from the instruction we were given by our manager,” he said. “He told us that we should not concentrate only on defense. We had to attack, otherwise would never be able to win. That was a really effective tactic and it led us to this wonderful result.”

Okada confirmed: “We knew we could have made it with a draw but we did not want to be passive.

“Denmark put us under some pressure at the start and we had some risky situations, so we changed the formation and we were able to score the two free-kicks that put us in the driving seat.

“They came back strongly after half-time but we showed that our team has strength that not all others have - we are truly united.

“We will enjoy this but we have not achieved our final end,” added Okada, who had set his players a pre-tournament target of reaching at least the semifinals.

“We have to go for more, starting with what will be a first game in the knockout stages, against Paraguay. The players will have a break tonight and tomorrow we start working again.”

Denmark coach Morten Olsen said his side had paid for their failure to take their chances they created throughout the match, but particularly in the opening quarter of an hour.

“Of course sometimes you miss opportunities but that is what makes the difference at this level. They took their chances, we didn’t take ours and it became an uphill struggle for us.

“The way the whole match evolved was decided by the two free-kicks in the first half. I don’t think we played a bad match.

“Have we failed? I will leave that for others to decide.”

Meanwhile, reigning champions Italy crashed out of the World Cup on Thursday, losing 3-2 to Slovakia, who reached the last 16 along with Paraguay, who drew 0-0 with Group F rivals New Zealand.

Robert Vittek was Slovakia’s hero with two goals before Kamil Kopunek’s clincher against a poor Italian side, who finished bottom of the group and for whom Antonio Di Natale and Fabio Quagliarella netted consolation strikes. Paraguay topped the group after their stalemate with New Zealand left them on five points to four points for the Slovaks, who are appearing in their first finals as a separate country.

Italy’s demise - and the added humiliation of finishing at the bottom of the group - was its first loss at the World Cup since it went down to Korea in the Round of 16 in 2002. In a dramatic match at Ellis Park in Johannesburg, Vittek’s first goal came when he ran onto Juraj Kucka’s pass and rifled the ball home hard and low from the edge of the box after 25 minutes.

The Slovak striker pounced again in the 73rd minute, knocking in a cross. Slovak defender Martin Skrtel stopped a shot on the line, but some of the Italian players argued the ball had crossed the line. Di Natale pulled Italy back into the match nine minutes before the end and, in a frantic finish, Quagliarella had the ball in the net from close range, but it was disallowed for offside. Kamil Kopunek lobbed Italian keeper Federico Marchetti five minutes before the final whistle to make it 3-1, but Quagliarella’s long-range shot gave Italy hope before the Slovaks were sent into wild celebrations at the end.

Paraguay snuffed out New Zealand’s hopes in a lackluster game in Polokwane, but the Kiwis exit the competition without losing a match.