Opposites attract in Korea vs. Uruguay

Opposites attract in Korea vs. Uruguay 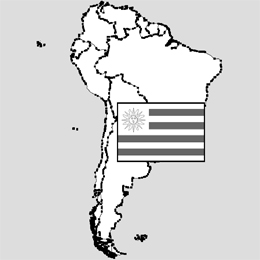 Cartographers tell us that if we were to dig a hole in Seoul through the middle of the Earth we would end up in the waters outside of Uruguay. The South American country is our antipode: Its latitude and longitude are the exact opposite from ours. That means that when it is sizzling in Seoul in June, Uruguayans are huddling around heaters in their coldest month.

Despite these differences, Uruguay and Korea have much in common. Like Korea, Uruguay was subject to colonization in the past. First the rulers of Portugal and Spain fought over the land, and then later neighboring Brazil and Argentina fought for primacy in the region.

Today, a blend of these many cultures can be found in Uruguay. During the country’s traditional festival, the Carnival, Uruguayans dance to both Brazilian samba and Argentinian tango music.

Uruguay is one of the most economically developed countries in South America, not unlike Korea in Asia. The nation is also situated on the water, so it serves as a bridge, like Korea, between the mainland and ocean.

Yet, even before Uruguay became our rivals in the upcoming World Cup game, Koreans had a negative impression of the country.

Korean farmers bitterly remember the Uruguay Round of international trade negotiations that reduced agricultural subsidies in the 1980s. As the round came into effect in the mid-’90s, farms across Korea screamed in pain over the round’s measures.

With the opening of trade with Uruguay, Koreans began feasting on skates caught by Uruguayan fishermen and imported into the country. It is safe to say that much of the steamed or stewed skate served in restaurants today in Korea comes from the South American nation.

Korea has had a poor track record with Uruguay on the football pitch.

Of the four times the national team has faced Uruguay so far, the Taegeuk Warriors have lost every match. Only one of those matches was an official game. That was during the 1990 World Cup Game in Italy, and Korea lost to Uruguay 0-1.

In order to win the game today, the Warriors must keep in mind the differences between the two country’s playing styles and cultures.

Uruguay is home to the game futsal, which is a variant of football played in a small indoor arena. Probably because of this, the Uruguayan footballers are adept at handling the ball in narrow spaces.

Korea, on the other hand, is the ancient home of chukguk, a football-like game that involved keeping the ball in the air.

Today’s match between Korea and Uruguay can be summed up as a competition of futsal against chukguk.

Since volley shots and headers are decisive to win, I hope that the Korean chukguk style helps our team win the game.