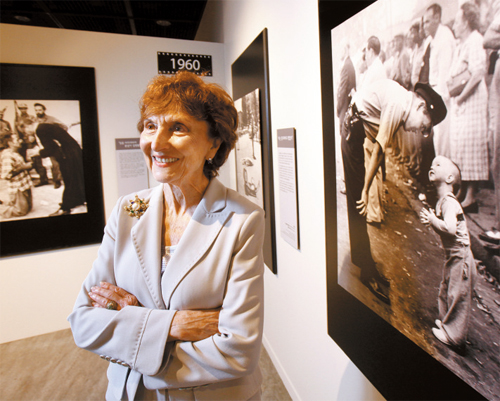 Cyma Rubin, the curator of a new exhibit called “The Pulitzer Prize Photographs” now showing at the Hangaram Design Museum at the Seoul Arts Center in southern Seoul, is an award-winning producer who is always looking for her next idea. By Oh Sang-min

She talks about each photograph as if she were there at the moment and the place where each picture was taken.

At the exhibition opening last Monday at the Hangaram Design Museum at the Seoul Arts Center in southern Seoul, both laypeople and experts in photography came to hear what Rubin had to say about the photos in a tour she gave after the opening ceremony.

“I love them all,” she said. “I cannot possibly pick just one.”

Rubin came to Korea about 10 days before the exhibit opened for its installation.

“This is my first time in Korea, and yet I barely had time to walk out of the hotel or the exhibition site until the exhibition opened,” she said on the day after the opening. She had spent her first day off on a tour through the galleries of Samcheong-dong.

The exhibition of Pulitzer Prize winning photographs was originally shown in Japan in early 1998.

“Later, there was a showing of it in Korea that same year and now it is traveling to many cities all over the world,” said Rubin.

Rubin was determined to oversee every aspect of the exhibit, from the installation to the exhibition catalogue.

“I hired top professional English-Korean language experts to do the translation of the catalogue and asked college professors to do the fact-checking,” Rubin said, but she said she decided not to have the exhibition catalogue produced in Seoul because she would not have been able to coordinate all of the details of the process.

She was also very particular about how the photos would be displayed. When asked if the entire exhibition had to be viewed at once, she said, “It cannot be displayed otherwise. It has to be in chronological order with all of the prize-winning pictures from 1942 to the present. Otherwise, the flow of the history would not be smooth. ”

Rubin is an award-winning producer and director. She won four Tony Awards for “No, No, Nanette,” the first Broadway show she produced. In 1999, she won Emmy and Telly awards for the documentary “Moment of Impact: Stories of the Pulitzer Prize Photographs,” which featured re-enactments of six of the photos with the photographers who took the pictures.

“I wanted to win an Emmy so badly, I just wanted it,” Rubin said, proving that once she lays her eyes on something she is capable of achieving it.

“I suddenly had new wings,” Rubin said, in describing the moments after she won the awards for the documentary.

Currently, she has another traveling exhibition in the United States.

The exhibition, “The American Soldier,” started in Louisville, Kentucky, and is currently being shown in Louisiana. The exhibition deals with nine wars involving American soldiers, including World Wars I and II and the Korean War, as well as the most recent wars in Iraq and Afghanistan.

She said the idea for the exhibition came to her in 1995, and that it took a great deal of planning before it was ready to open in July 2007.

“The exhibition is extremely popular and is booked through July 2011,” Rubin said, although she said she was already thinking about the theme for her next exhibition, which, if she has her way, will be another success.