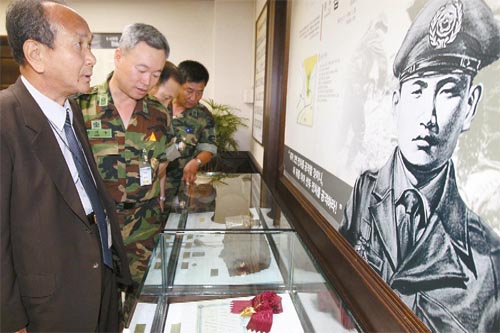 The Army yesterday opened a “Hall of Heroes” honoring six South Korean Army soldiers who distinguished themselves in combat during the 1950-53 war against North Korea to mark the 60th anniversary of the conflict’s outbreak. Shim Seung-taek looks at a portrait of his younger brother, First Lt. Shim Il, in the hall. [YONHAP]


A day before the 60th anniversary of the outbreak of the Korean War, the military opened a “Hall of Heroes” honoring six South Korean Army soldiers who distinguished themselves in combat during the 1950-53 war against North Korea.

The six heroes - Maj. Kim Kyung-jin, First Lt. Shim Il, Second Lt. Kim Man-sul, Master Sgt. Baek Jae-deok, Pvt. Kim Yong-sik and Pvt. Hong Jae-geun - were all previous recipients of the Order of Military Merit Taegeuk, the highest honor given to a soldier in South Korea. Five of the six soldiers were killed in the battles for which they earned the Taegeuk, while Lieutenant Kim died in a later battle.

A total of 55 South Korean soldiers received the Taegeuk for extreme bravery during the Korean War. The military said the other 49 recipients not commemorated in the hall are either generals or have been honored in past tributes.

“Each of the six people inducted here is the epitome of a true soldier,” said Commander Park, during the opening ceremony, according to the military. “They showed how a soldier should act.”

Each of the feats achieved by the heroes would be good material for a stirring war movie, the military said.

*Lieutenant Shim, along with five commandos, encountered a North Korean tank and incapacitated it with grenades and Molotov cocktails in a battle in Chuncheon, Gangwon, on June 26, 1950. That was the first victory for the South Korean military during the Korean War. The victory also delayed the North’s southward penetration by three days, which helped South Korea and its allies form a line of defense.

*The Taegeuk is rarely given to low-ranking privates, but Kim and Hong made a successful surprise attack on a North Korean guerilla unit during one of the fiercest battles of the war in Gyeongju, North Gyeongsang, in August 1950. The two captured 15 soldiers alive.

*Major Kim was inducted into the Hall of Heroes because of his sacrifice at a battle to reclaim Baekma Highland in Cheorwon, Gangwon, a well-known battle line that changed hands many times. In an operation to retake the highland for a ninth time in October 1952, Kim took the lead, armed with only a pistol. Inspired by his courage, his battalion followed and succeeded in recapturing the line. Kim was killed after being hit by an enemy shell.

*Sergeant Baek waged a hand-to-hand combat against soldiers from China, North Korea’s ally, who attacked Saetbyeol Highland, Gangwon, at daybreak in May 1953. Baek killed around 10 enemies.

*Lieutenant Kim fought in 19 battles against Chinese troops in Beti Highland in Gangwon in July 1953, and killed 314 Chinese soldiers and wounded 450 others.