Years on, mission finally over for the Skeletons

Years on, mission finally over for the Skeletons 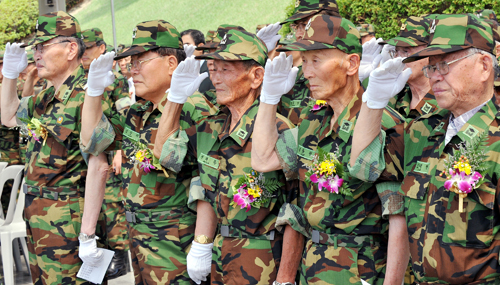 Twenty-six military veterans who fought as South Korea’s first commando soldiers during the Korean War salute Army Cmdr. Park Jong-sun during their official discharge ceremony yesterday. The event was held at Gyerongdae, the integrated military base in South Chungcheong. By Kim Sung-tae

South Korea’s first commando group, known for a short but legendary military feat during the Korean War, discharged the last of its “on-duty” soldiers yesterday, the military announced.

The Skeleton, made up of 647 commandos, was dismantled after completing its six-month mission in June of 1951, but the unfinished war prevented some of the commandos from being officially discharged.

Twenty-six surviving commandos attended the discharge ceremony at the Korean Army headquarters in Gyeryongdae, South Chungcheong, flanked by around 800 family members and active-duty soldiers, the military said. They were congratulated by Korean Army Chief of Staff Hwang Eui-don.

The Skeleton was formed in January 1951, when the tide of the six-month-old Korean War turned against the South and its UN allies as China intervened on the North’s side. The South’s forces, which had advanced as far northward as the Yalu and Tumen Rivers near the border with China, were forced back in what historians call the “Jan. 4 Retreat.”

To keep the enemy from pressing further south, the Skeleton was told to launch a sudden attack on military bases in North Korea and China. The mission was grueling: The crew survived 60 days on two weeks’ worth of powdered grain, covering 20 to 30 kilometers (12.4 to 18.6 miles) a day. But it was also successful. The Skeleton captured around 300 enemy soldiers - including Lt. Gen. Gil Won-pal, who had charge of North Korea’s top commandos - and destroyed security facilities. “We could fight, hovering between life and death and enduring the worst situations, because we believed that without a country, there is no freedom and life,” said Jeon In-sik, head of the Skeleton veteran association.